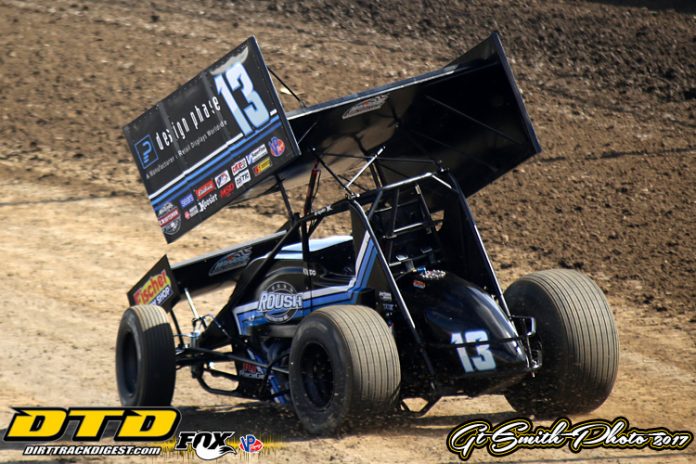 SEDALIA, MO – While Missouri State Fair Speedway is only about 40 miles from his hometown of California, Mo., World of Outlaws Craftsman Sprint Car Series driver Clyde Knipp has never raced at the half-mile. The teenager will make his debut at the historic oval this week as the Outlaws return to Sedalia for the first time since 2012.

The Sedalia Show-Me State Showdown for the World of Outlaws Craftsman Sprint Car Series hits the track on Friday, May 5. The event marks the series’ first trip to the historic half-mile since 2012.

“Running on the historic half-mile is something that I am really looking forward to,” said Knipp. “I’ve heard some great stories, from the time I was really young, about the track over the years and a lot of drivers I know have raced there. We’ve raced at a lot of other historic tracks over the last year or so and it will be great to add Sedalia to that list.”

After wrapping up the annual early season West Coast Swing in early April, followed by a trio of races in Texas, Knipp and his team were able to make it back to their shop for a handful of days before heading to Indiana this past weekend. The team is back home again this week, gearing up for the races at Sedalia and a trip to Kansas, the following night. This will be one of the last times the team will be able to spend an extended amount of time at their shop, before hitting the road for the heart of the season, through the summer months.


“Getting to be home for a few days and work out of our own shop is huge as well,” Knipp said. “It’s nice to get a good home-cooked meal that my mom makes and to get to go to church with my grandpa as well. My mom and grandpa go to a lot of our races in the Midwest, but at Sedalia, there is going to be a large number of our local supporters and folks we’ll have there watching us. Hopefully we can get some good results in front of our hometown crowd.”

“There are a handful of drivers that I know personally who I can go to at any given time of the night,” he explained. “I lean on a lot of different drivers and they help me, whether it’s personal things or car set-up, with Andy (Korte) my crew chief. It’s great how accommodating folks have been out here. You are surrounded by people out here that love the sport and want to be out here working on the cars and racing.”

With nearly a full season on the road with the World of Outlaws Craftsman Sprint Car Series under his belt, Knipp is seeing many of the track for the second and even third time this season. He looks to use that experience to his advantage as the team continues to improve its performance each night against what is one of the strongest field of full-time Outlaws drivers ever assembled.

“Like I tell everyone, it’s a life,” said Knipp. “You wake up doing what you love and go to bed with a smile on your face. Sometimes it can be stressful, though. We just finished up on the West Coast and those tracks are tough, especially running at places you’ve never seen. That makes it a little harder going into the night and you feel like you are behind the eight-ball. You just have to remind yourself what you are doing and that you are racing every night and thank the Lord that He has given you the opportunity to do it.”

The main goal for Knipp this season is to continue to get seat time and qualify for A-Feature events. Not only does making the feature each night help the team’s bottom line, but it also gets the teenager more laps on the track as he continues to watch and learn from the best in the business night in and night out.

“Seat time is big, but I think my team and I right now are starting to transition to actually learning what the car is doing and how to get faster, especially me, with the lack of experience I have in a sprint car,” shared Knipp. “The biggest thing is to slow yourself down mentally, but still go wide open. Trying to hit our marks every time we are on the track and finding the fastest way around is the main thing we are working on right now and improve our lap times.”

Tickets for the Sedalia Show-Me State Showdown, featuring the World of Outlaws Craftsman Sprint Car Series and Mod Lites at Missouri State Fair Speedway in Sedalia on Friday, May 5, can be purchased online at https://slspromotions.ticketforce.com or by calling SLS Promotions at 815-344-2023 and at the track on race day.