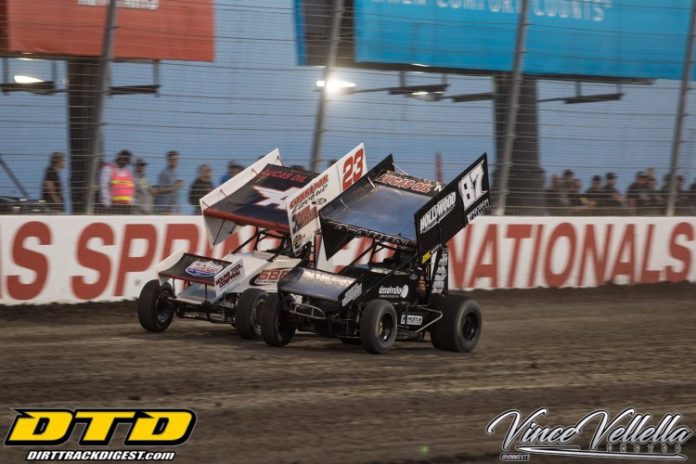 TULSA, OK – The Lucas Oil American Sprint Car Series National Tour presented by the MAVTV Motorsports Network returns to competition as a prelude to NASCAR weekend in Kansas City with the McCarthy Auto Group KC Klassic presented by Racinboys.com on Thursday, May 11 at the famed Lakeside Speedway.

In the 2016 showdown at the four-tenths mile Kansas oval, Missouri’s Brian Brown found his way to Victory Lane for the first time after getting around race long leader, Blake Hahn, on the 22nd lap of competition. Currently on Brown’s 2017 lineup of events, he’ll have plenty of competition on hand as Lucas Oil ASCS National Tour point’s leader, Sam Hafertepe, Jr. carries a five race win streak into the Lakeside.

Joining the Lucas Oil ASCS National Tour presented by the MAVTV Motorsports Network is the Speedway Motors ASCS Warrior Region presented by Impact Signs, Awnings, and Warps as well as the Lucas Oil POWRi WAR Sprint Cars and USRA M-Mods.Tying the record set by Gary Wright in 2005 with his win at the Missouri State Fair Speedway by a few feet over Johnny Herrera at the line, Hafertepe posted a ninth place finish in last year’s event at Lakeside.

Sedalia’s Jonathan Cornell holds the top-spot in ASCS Warrior Region standings by 74 points over Taylor Walton. A hair-raising battle this past weekend that saw the No. 28 finish runner-up to Brad Loyet at Lucas Oil Speedway, Cornell placed 14th in 2016 at Lakeside Speedway.

Also leading by 74 markers with the Lucas Oil POWRi WAR Sprint Cars, Korey Weyant enters Lakeside with a single victory on the season on April 15 at I-35 Speedway in Winston, Mo. One year ago, Missouri’s Clinton Boyles raced through the field from 10th to claim victory with the Non-Wing division.


A part of the Summit Racing Weekly Racing Series with the USRA B-Mods, Andy Bryant leads Out Pace B-Mods standings at Lakeside.

Thursday, May 11 will open at 5:00 P.M. with Hot Laps getting underway at 7:00 P.M. (CDT). Discount tickets are on sale at http:/www.racinboys.com until Wednesday, May 10. After that, all tickets can be purchased at the event. Lakeside Speedway is located at 5615 Wolcott Dr. in Kansas City, Kan. For more information on Lakeside Speedway, log onto http://www.lakesidespeedway.net.