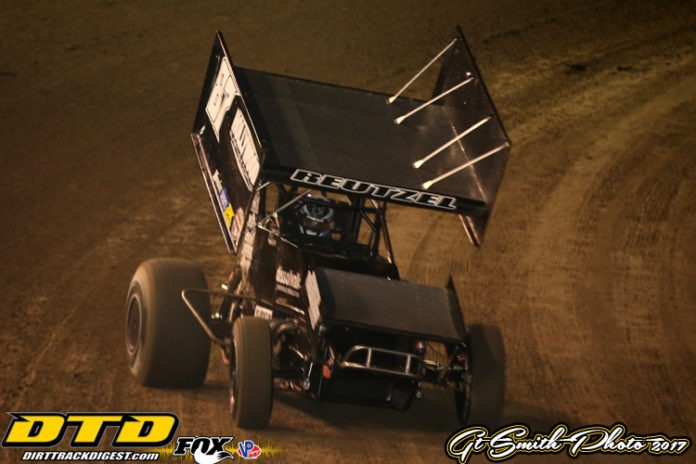 “You know, Sam and I have been able race each other clean so hats off to Sam for that. I felt the bottom was there and I was watching lapped cars as I was catching them and none of them were running the top. I wasn’t sure if it was because they couldn’t run up there or not, but I finally did see a nose get under me so I went all out and that’s when Sam went by me, but luckily I was able to get back by him,” commented Aaron. “This a big win for my guys. We’ve been knocking on the door for a while to get a win.”

Battling early on with Matt Covington, the pair were wheel to wheel at both ends of the four-tenths mile oval for the first three laps before the red lights blinked on for Cody Ledger who ended up going for a ride in the first two turns.

Challenging the low line on the No. 87 on the restart, Aaron was able to hold off Covington’s No. 95 with Sam Hafertepe, Jr. in tow. Running the top in one and two and the hub in three and four, Aaron was able to garner some breathing room as Hafertepe moved to the runner-up spot on Lap 11.


Starting to work into slower traffic as the race moved past the half-way point, the top three were all within striking distance with the trio utilizing multiple grooves in hopes of gaining the advantage. Building his momentum, Hafertepe had the run. Rolling off the second turn, Hafertepe snagged the top spot on Lap 18. Crossing down the track, Aaron returned the move in kind as both drivers navigated the bottom side of the Speedway. Having run a diamond line to catch and pass Aaron, the change of line by Hafertepe was due to a lack of tear-offs.

As Sam explained, “I wanted to keep running the top, but it got to where I couldn’t see the wall anymore and I didn’t want to junk the car.”

Trailing the No. 87 by 0.668 seconds at the drop of the checkered flag, the win by Aaron Reutzel stopped Hafertepe’s win streak at five. That ties the Texas native with “The Texan” Gary Wright who went five in a row in 2005. Sam did however set a series record as the first driver to open the season with five consecutive race wins.

Matt Covington posted his best finish of the season with a third place showing in the T&L Foundry No. 95 with Josh Baughman crossing fourth in the FK Midwest No. 17. Dustin Morgan completed the top-five in the Ark Wrecking No. 93.

With a field of 36 on hand, four Heat Races went to Josh Baughman, Sam Hafertepe, Jr., Aaron Reutzel, and Matt Covington who was the night’s FSR Radiator High Point driver of the Night with his from eighth to win his Heat Race. Twin B-Features were topped by Blake Hahn and Jack Dover. Provisionals were taken by Kyle Bellm and Skylar Gee based on their owner points. A regional provisional was awarded to Danny Thoman.

For continued updates on the American Sprint Car Series and the over 150 races that make up the National Tour, as well as seven regional tours, log onto http://www.ascsracing.com.

Heat Races: (Top 16 in Passing Points advance to the A-Feature)