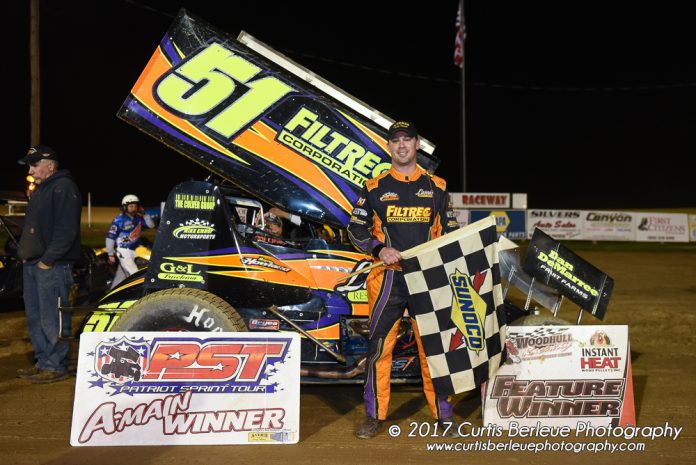 George Suprick and Steve Collins would bring the field to green with Collins taking the early lead before the first yellow was drawn. Because no laps were complete, the field would return to double file with the original starting grid.

This allowed Howland, who started fourth, to re-strategized his starting approach and power around both Collins and Suprick grabbing the race lead.

Another caution would occur on lap eight when Derek Locke and Ryan Kissinger made contact in the bottom of turn four, Kissinger was able to pull away but Locke would need extra attention.

Prior to that, Howland had met lap traffic allowing Collins to gain some ground on the leader.


Howland would again meet lap traffic on lap 14 eliminating his advantage from Collins and Suprick. Meanwhile, making their charge to the front was Darryl Ruggles, Jared Zimbardi and Cory Sparks who started 9th,10th and 11th, all who were also participants in the Evingham Site Excavation dash.

The three would maneuver by fourth and fifth place drivers, Joe Trenca and Dylan Westbrook and would continue to swap positions in the second half of the event.

Doc Collins would have one more shot at Howland on lap 19 as he would pull even terms with him heading down the back stretch but lap traffic would play victim for Collins, as Howland was able to go on to cruise for the win over Collins, Suprick, Cory Sparks, and Jared Zimbardi.

The Series now heads west to Raceway 7 in Coneaut, Ohio for its first of two appearances in 2017. Kyle Drum was last season’s winner over Bryan Howland and Justin Barger. Be sure to log onto patriotsprinttour.com and like Patriot Sprint Tour on facebook. You can also follow @PatriotSprints on Instagram and Twitter.

The 36 cars who packed into Woodhull Raceway is the most ever in the 18 events ever held at the speedway with drivers representing states from New York, Pennsylvania, Ohio, and Ontario, Canada. Jonathan Preston unfortunately suffered motor issues during hot laps and was unable to race in his qualifying heat. Scott Kreutter filled in for injured Parker Evans which is his 7th different owner/car he has raced for at Woodhull. Bryan Howland has now won in 2011, 2013, 2015, and 2017 at Woodhull. Joe Trenca and Kelly Hebing were kind enough to sign autographs and take pictures for the junior fan club during intermission as well.