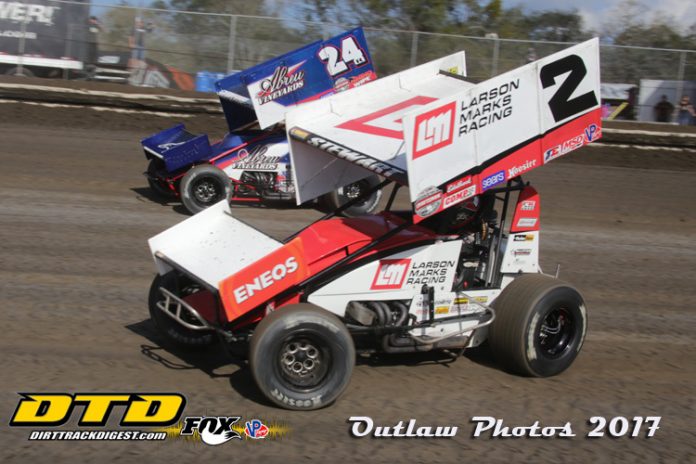 MINOT, ND – Tickets are now on sale for the Gerdau Recycling Magic City Showdown, featuring the World of Outlaws Craftsman Sprint Car Series at Nodak Speedway in Minot, North Dakota, on Sunday, August 20. Tickets can be purchased online at https://slspromotions.ticketforce.com or by calling SLS Promotions at 815-344-2023.

Donny Schatz, who was born and raised in Minot, extended his win streak at Nodak Speedway to five races last year, leading all 35-lap of the race. The win was one of 25 on the season for Schatz, who claimed his third straight and eighth overall World of Outlaws Craftsman Sprint Car Series championship. Schatz leads the series this season with nine wins through May 14.

Joey Saldana and Daryn Pittman have each won once at Nodak Speedway during their careers. In the 11 main events contested by the World of Outlaws Craftsman Sprint Car Series at Nodak Speedway, dating back to 2006, seven different drivers have been victorious.

Battling Schatz, Saldana and Pittman in 2017 is a talented group of full-time competitors, including Brad Sweet, who is Pittman’s teammate at Kasey Kahne Racing, David Gravel who is currently second in points, Shane Stewart, who won eight A-Feature events last year, Jason Johnson, the reigning winner of the Knoxville Nationals, who has a pair of victories this season, fan favorite Jason Sides, veteran drivers Paul McMahan and Kraig Kinser, as well as defending Kevin Gobrecht Rookie of the Year Award winner Greg Wilson.

Logan Schuchart, who scored his first series win last season and already has two victories this season, leads the brigade of young drivers, along with his Shark Racing teammate Jacob Allen and teenager Clyde Knipp from Missouri. Sheldon Haudenschild from Ohio and Brent Marks from Pennsylvania are battling for the Kevin Gobrecht Rookie of the Year award.


Tickets for the Gerdau Recycling Magic City Showdown, featuring the World of Outlaws Craftsman Sprint Car Series at Nodak Speedway on Sunday, August 20 can be purchased online at https://slspromotions.ticketforce.com or by phone at 815-344-2023.