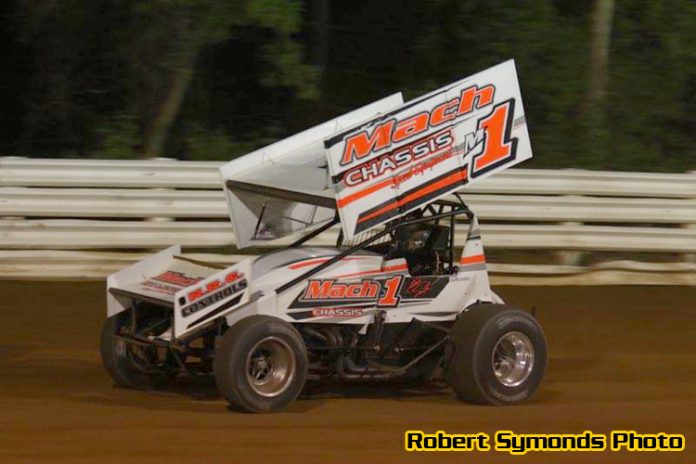 SELINSGROVE, PA – Mark Smith returned to the Selinsgrove Speedway on Saturday night to compete with the Lucas Oil Empire Super Sprints. For Smith, there was no place like home. The former Selinsgrove track champion took the lead midway through the event while on his way to winning the Mach 1 Chassis Sprint Car Spectacular 25-lap A-Main event.

“This is actually pretty good,” stated Smith after the win. “We won last Saturday in the 410 at Port Royal and last night so this makes it three in a row. I just want to thank my guys. They do a hell of job, they bust their asses to get this car to the race track weekly. They all work hard.”

Current series point leader Jason Barney started alongside Ryan Kissinger for the start of the NAPA Auto Parts Tour of the US feature which got off to a rocky start as Adam Carberry ended up getting over in turn two. Contact between Cody Keller and Coleman Gulick ended both of their nights before Carberry was collected. Luckily everyone was uninjured in the incident.

Once action resumed, Barney led the first circuit before surrendering the lead to third starting Derek Locke. Locke worked by Barney on the bottom of turns three and four to secure the advantage.


Locke set a quick pace out in front with Barney feeling the pressure from Ryan Kissinger who eventual got by for the runner-up spot in line. Locke and Kissinger remained the lead duo as they got to traffic on lap seven. Locke was masterful in traffic expanding the gap back to Kissinger.

On lap 12 Kissinger’s night came to an unfortunate end as his car slowed with a blown head gasket. He coasted around the speedway but couldn’t clear the track forcing the yellow flag to come once more.

Smith sat third behind Locke and Robbie Stillwaggon for the restart. Smith made the move to get around Stillwaggon in turns one and two before disposing of Locke in turns three and four on the outside for the lead. From there Smith does what he always does at Selinsgrove, he checked out.

“I found the middle there a little bit then I could move up,” stated Smith. “At the begining I couldn’t run there but I think because the fuel load burned off I could go up there.”

Nate Snyder forced the race to slow one final time as he exploded his right rear tire on lap 20. He came to a stop in the fourth turn. Smith now had to navigate his way through one final double-file restart.

Smith was perfect at the drop of the green getting the jump on Locke and he now had to contend with Chad Layton for the second position. Layton made the move through one and two to momentarily take second. Locke would have none of it getting back by on the backstretch.

Smith went on to score his second career ESS win at Selinsgrove and his eighth career win overall with the series. Locke, of Mechanicsburg, Pa., settled for second. He reported that a mechanical issue that caused him to lose the handling on his No. 77.

“This a good run,” commented Locke. “I’m a little disappointed, but you know, it happens. We had a really good weekend. We were really good there until about lap 15. It looks like we lost the left front arm. It bent under the car. It got me really tight getting in. I didn’t know what was going on. I thought I lost the left front shock. It was really good. We got a lot to build on.”

Layton, of Harrisburg, Pa., has only run a handful of races since his return to Sprint Car competition. Although it wasn’t a win on Saturday night, Layton was pleased with the effort as he continues to shake the rust off.

“It seems like we keep getting better and better,” cited Layton. “The car was as good tonight as it’s been since day one. I was sitting on the sidelines for a couple years so I’m a little rusty. I’m starting to shake the cobwebs off. I think we are starting to go in the right direction.”

Barney held off Davie Franek in the final laps to finish in fourth forcing Franek to settle for the final position in the top five.

Selinsgrove/ESS Notes: A field of 30 sprints filled the pits…Despite unpredicted rain that fell from 6 to 11AM track crews did a great job producing a smooth surface…Ryan Kissinger (1 Lap), Michael Walter (4 Laps) and Davie Franek (10 Laps) set new track records…ESS regulars Alex Vigneault and Matt Tanner were surprise fast times in their timed hot laps sessions…Colby Womer had issues under the hood which saw him drop out of his heat and B-Main…Next up for the Lucas Oil ESS Tour is a big Memorial Day Weekend with a Saturday visit at Canandaigua Paying $2,500 to win, $1,500 for second and $1,000 for third followed by a $2000 to win event at Utica-Rome. 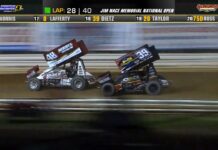 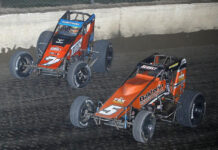