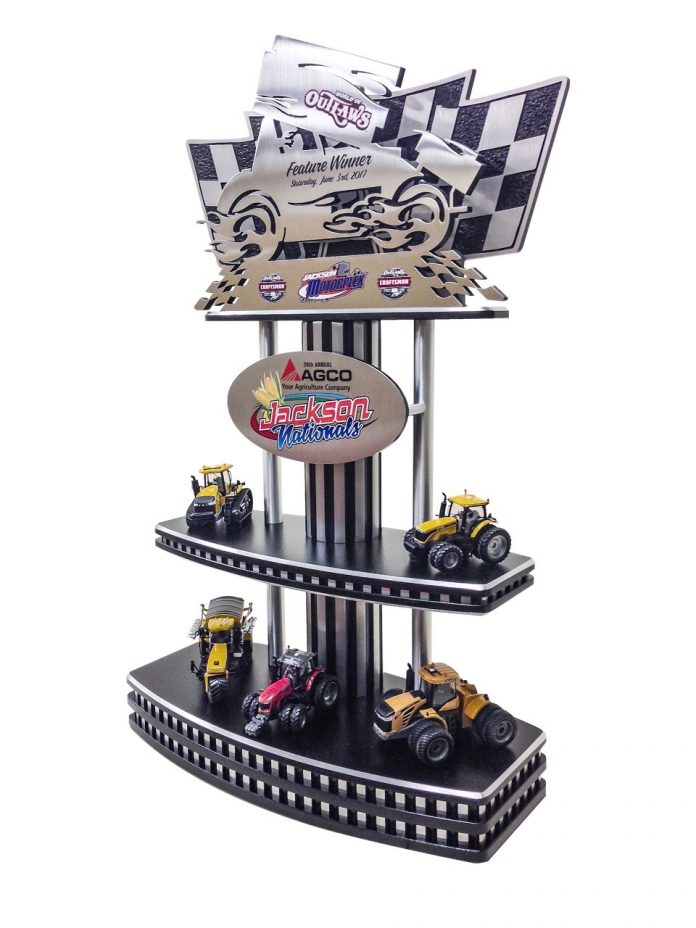 JACKSON, MN – When a driver wins a marque event, the big payday is always a plus, but that is usually spent pretty quickly. What stands the test of time and reminds a driver of their special win is a unique, one-of-a-kind trophy. That is exactly what the winner of the finale of the 39th Annual AGCO Jackson Nationals for the World of Outlaws Craftsman Sprint Car Series at Jackson Motorplex will be awarded on Saturday, June 3.

The trophy for the World of Outlaws Craftsman Sprint Car Series main event winner in the finale of the 39th AGCO Jackson Nationals was commissioned to Simes Graphic Designs by Jackson Motorplex and produced by L&H Manufacturing. Simes Graphic Designs and L&H Manufacturing have teamed up to create unique trophies for the short track auto racing industry for many years.

“Our philosophy is to create memorable trophies that will stand the test of time,” said Simes, owner of Simes Graphic Designs in Mandan, North Dakota. “It is truly an honor to be asked to design and help create the trophy for the AGCO Jackson Nationals. The event has such a rich history and the list of past winners is truly a ‘Who’s Who’ of the sport. With the World of Outlaws being part of the AGCO Jackson Nationals this year, it will add another chapter to that storied history.”

The trophy is hand-made out of aluminum. The base is cut from 3/8th-inch aluminum plate using a CNC water jet. Three sandwiched plates were cut to represent gear teeth, while the same technique was also used to create the middle base and top base. Each progression becomes a bit smaller as it reaches the top.

The overall height of the trophy is 27-inches. Mounted on top is an aluminum plate cut sprint car with flames for tires. Behind the sprint car is a checkered flag that is hand-cast in aluminum. The pole holding up the trophy was made from material that is used for flag poles, which is also aluminum. Two 1-inch aluminum poles add what appears to be support, but are actually there to provide assistance with symmetry and balance.

The oval plate in the center was created to hold the event logo. The farm equipment was supplied by AGCO and mounted to the trophy. Each piece of equipment represents the type of large farm equipment that AGCO manufactures.

“Much of the work went into the finishing and painting,” explained Simes. “All pieces were finely sanded to a directional finish and then printed graphics were applied where needed. Other pieces were masked and painted to give it a light and dark finish with a final clear-coat to overall pieces. Finally, everything was assembled for the finished appearance.”

Tickets for the 39th Annual AGCO Jackson Nationals, featuring the World of Outlaws Craftsman Sprint Car Series, along with the Upper Midwest Sprint Car Series (UMSS), the Midwest Sprint Touring Series (MSTS), the Nebraska 360 Sprint Series and the RaceSaver IMCA Sprint Cars at the Jackson Motorplex in Jackson, Minnesota, June 1, 2 and 3, can be purchased online at slspromotions.ticketforce.com and at the track. Three-day ticket packages are available as well as individual, single night tickets.