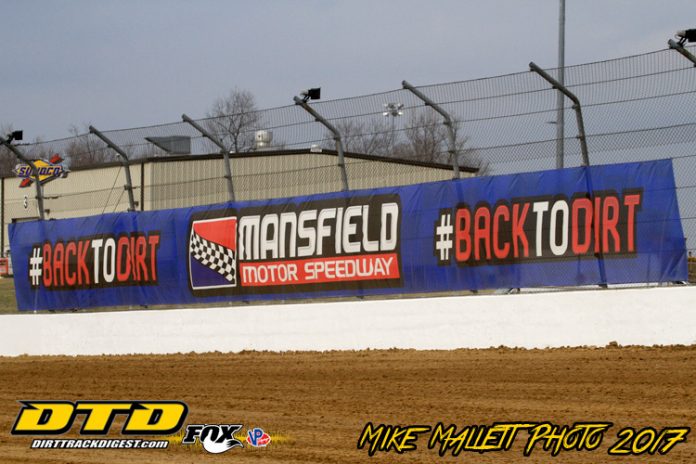 In addition to the make-up feature, the Arctic Cat All Star Circuit of Champions will take part in a second, complete program on October 13, also awarding a $5,000 top prize, as well as full points toward the 2017 Arctic Cat All Star championship. The second Arctic Cat All Star program, complete with qualifying time trials, heat races and respective mains, will be open to all competitors, but only the 24 drivers qualified for the postponed main event will have the opportunity to participate in the make-up feature. Alternates may be eligible, which will be based upon the B-main finishing order from May 28, but only if one or more of the 24 starters are not present.

“I want to thank the Arctic Cat All Star Circuit of Champions for working so well with us in finding a suitable rain date,” Cody Sommer explained, Mansfield Motor Speedway promoter. “Although most of the event on May 28 was complete, we felt it would be best for fans to return to Mansfield and see an entire show, as well as the make-up feature. To have the Series back during their final weekend of competition, and to have the opportunity to showcase two features on the same evening, is very exciting for everyone involved. This doubleheader will kick-off a major weekend of racing in Ohio.”

With a second, full program now on tap, fans will have to purchase a new ticket to gain access on October 13, but will be eligible for a discount if a ticket from May 28 is presented; one discount per ticket. Additional information regarding ticket pricing and reserved seating will be released in the coming weeks via social media and online at www.mansfieldmotorspeedway.com.

With the season finale nearly five months away, the Arctic Cat All Star Circuit of Champions will first turn their attention toward a pair of programs in Western Pennsylvania, visiting Lernerville Speedway and Mercer Raceway Park on Friday and Saturday, June 2-3, respectively. Those who can not attend the upcoming Arctic Cat All Star events in Western Pennsylvania are invited to watch online via Speed Shift TV at www.speedshifttv.com. A live pay-per-view internet broadcast will be conducted and available for purchase starting at $24.95. Those seeking additional information should contact Speed Shift TV by email at help@speedshifttv.com.