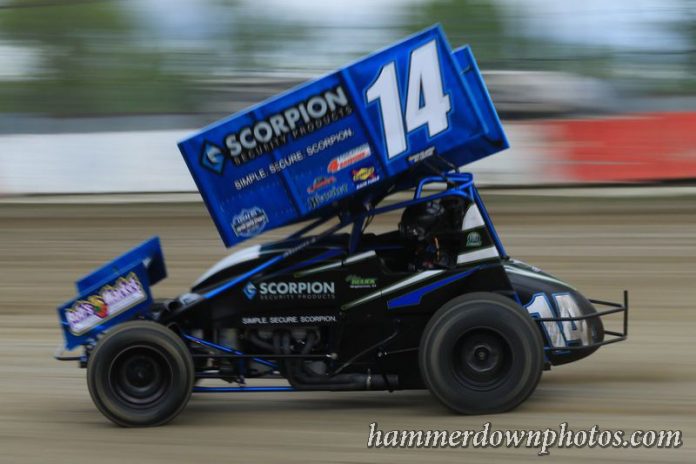 GRANBY, QUE – Binghamton, NY’s Coleman Gulick has been fast all year on the Lucas Oil Empire Super Sprint (ESS) Tour. Friday night at Autodrome Granby, near Montreal, Quebec he took advantage of a fast track and good redraw to pick up his second win of 2017 and third overall in his short ESS career.

“I have never been here but man I love this track!” exclaimed Gulick, “It’s fast which is right up my alley.  We started further back the last few races and we had a fast car but just couldn’t get the win.  But tonight it all worked out.”

Gulick took the lead on a lap five restart from first year runner Brett Wright and set a quick pace all throughout to remaining portions of the A-Main.  With the final 20 laps going green to checkered lapped traffic was a concern. “The lapped cars were tough because they were all fast so you had to work hard to get around them,” Gulick continued, “With that happening I would figure someone might be coming up on me.”

That someone was Wright.  He did stay in eyesight of Gulick all race and when the white flag was displayed coming off turn four he was only a few car lengths away.

“Yea, I was closing in on Coleman the last few laps and thought I might have had a shot,” Wright said afterwards. “But, I just had to get out of the throttle on a lapped car and that messed me all up. My car just pushed up the track and that was it.”

For Gulick and his Scorpion Security Products backed, Mach 1 Chassied #14, it enabled him to close in slightly on point leader Jason Barney who took fifth. “I just have to thank my crew, Josh and Parker, they made the trip and work real hard to get this thing fast. It means so much,” Gulick noted.

For Wright, his best ever ESS finish to date and coming off a DNQ the Sunday prior at Utica-Rome, he was all smiles afterwards. “My girlfrien came back and said I drew #1, was that good? I go heck yea that’s good!” Wright said with a laugh, “I was confident I had a good car so that draw got me excited.”

“The track was fast but I didn’t mind it at all, I just feel more comfortable,” Brett went on, “But when the rain came I though we made too many changes but the track came back to us. I’m just real happy.”

Jeff Cook, Paulie Colagiovanni and Devin Caron found their sprints on their wings during the A-Main but all walked away unharmed.