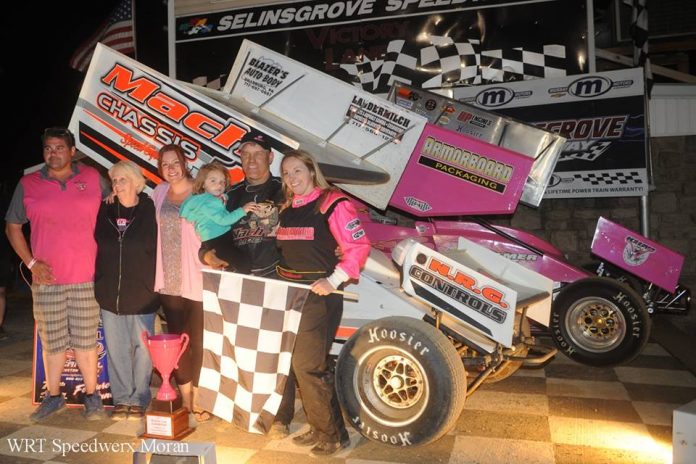 SELINSGROVE, PA. – Saturday night marked the fourth annual running of the Kramer Cup at Selinsgrove Speedway. The Kramer Cup, a literal pink cup presented to the winner each year, went home with Sunbury’s Mark Smith for the third time out of the four tribute races in memory of sprint car driver Kramer Williamson.

Williamson was the 2008 Knoxville Sprint Car Hall of Fame driver Kramer who lost his life in a racing accident in 2013. He is a former track champion a Selinsgrove Speedway and had unmeasured success and impact on central PA Sprint Car racing.

Timed hot laps set heat races with inversions. When everything was said and done Smith was on the pole of the 30-lap main event in search of Kramer Cup number three. Derek Locke was the first challenger for Smith, and Locke was the only driver other than Smith to see the daylight of the race lead in the early laps. Locke took advantage of a restart and led the field into turn one before his car turned sideways and Smith went back into the lead. Cody Keller took advantage of the sideways Locke to take second.

On lap 11 the race leader was into traffic, but Keller could not make up ground as Smith sliced his way through the back of the field. A caution flag flew at half way that put Keller aside of the Smith for the double file restart with new challenger Greg Hodnett joining the front duo. Derek Locke climbed back into the race for second with Keller and Hodnett while Smith started to drift away.

Keller’s strong run came to an end when he lost his right rear tire on lap 18. Hodnett was the challenger to Smith on the restart before Selinsgrove point leader Davie Franek moved into second. Franek closed on Smith initially after taking the spot, but never got close enough to challenge Smith for the win.

Kramer Williamson’s daughter, Felecia Williamson, paced the field in the “Pink Panther” number 73 before the feature event. The Williamson family also joined Mark Smith in victory lane with the 73 at the conclusion of the feature race.

The beautiful Kramer Cup was custom finished by Keller’s Auto Body in Selinsgrove.

Last lap heroics were written all over the first ever Econo Late Model feature at Selinsgrove Speedway on Saturday night. Shaun Miller led the whole feature event with Andrew Yoder in chase. Miller ran the middle of the track, while Yoder peddled around the bottom of the race track. Yoder kept constant pressure on Miller the whole race.

On lap 12 the front runner began to catch lap traffic and soon Tim Fedder had joined the duo at the front. Miller’s line around the outside allowed him to move past the traffic until the white flag was given. Miller tried to pass a lap car around the outside and although he completed the pass, it was not before Yoder turned down across the speedway to pull even with the leader.

As they drove under the white flag Yoder began to inch ahead securing the race leader in turn two. Yoder made a bold move on the back stretch and into turn three splitting some laps cars leaving Miller and Fedder behind on his way to the win.

There is an old saying that if you continue to put yourself in good spots, good things will happen. That was the case for the A&A Auto Store Pro Stock winner. Shawn Lawton has been in contention all season long and finally overcame the challenges to pick up his first win on Saturday night. Lawton dominated the feature event running through mostly unchallenged.

AJ Hoffman and Dustin Snook waged a tight battle for second while Lawton drove away. Hoffman won out on that battle to finish in the runner up spot.

Stay in touch with the speedway by visiting SelinsgroveSpeedway.com or following the track on Facebook and Twitter.