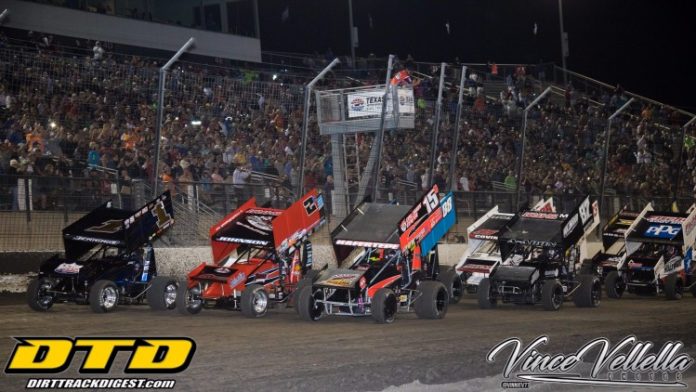 TULSA, OK – Turning 25 in 2017 is the ASCS Sizzlin’ Summer Speedweek and this year’s test of driver and machine will see stops in Texas, Oklahoma, and Missouri with seven races across nine nights. Speedweek 2017 for the American Sprint Car Series is also the fourth edition of the Bob Westphal Memorial Cup in honor of the late founder of Wesmar Racing Engines.

Kicking off on Friday, June 9 at West Texas Raceway in Lubbock, Texas the return to the three-eighths mile is the first time in 13 years that the Lucas Oil American Sprint Car Series has seen action in Lubbock. Formerly known as Tech Motor Speedway, then Lady Luck Speedway, the track saw five events from 2002 to 2004. Of those five events, two drivers traded off trips to Victory Lane with Travis Rilat topping action three times to Gary Wright’s pair of triumphs.

Friday, June 9 at West Texas Raceway will get underway at 8:00 P.M. (CDT) with Hot Laps. West Texas Raceway in Lubbock, Texas is located at 12503 Highway 87. Admission for this weekend is $20 for adult with kids age four and under free into the grandstands. More information, including directions can be found at http://www.westtexasraceway.com.

The Show-Me State follows on Friday, June 16 with a trip to Randolph County Raceway in Moberly before the finale at the “Diamond of Dirt Tracks” Lucas Oil Speedway in Wheatland.

Trailing, but not by much, is Johnny Herrera with Wayne Johnson in tow. Taking a weekend to experiment at Knoxville Raceway, the new setup paid off for Johnson with his first win of the 2017 season. Matt Covington holds fourth with Aaron Reutzel looking to add to his win total. The 2015 series champion will be having to rebuild however as a weekend in Minnesota proved destructive for the No. 87 team.