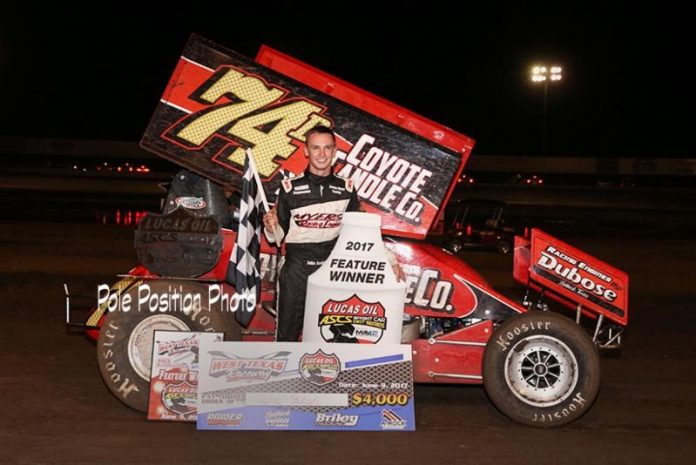 “This is my first 360cid win and for it to be an ASCS National Tour race, it’s special,” said Jake.

“I just have to thank my car owner for the opportunity he’s given me, and for giving me such a great car. Something like this is what I’ve been praying for, and I’m lucking to have someone willing to put me in a car like this.”

Topping a roster of 22 strong, Bubak is the 137th driver to pick up a win with the Lucas Oil ASCS National Tour presented by the MAVTV Motorsports Network; doing so in his third career A-Feature start.

Taking off third on the lineup, Bubak rolled to the runner-up spot on the start with Jake Greider leading his first career laps with the Lucas Oil ASCS National Tour. Taking advantage of a miscue by the Kansas racer on Lap five, Jake shot to the point the following lap.

Red on Lap 8 for Justin Henderson, who tangled with Jake Greider in the first turn, the restart saw Sam Hafertepe, Jr. bike his No. 15h through turns one and two before ending up on his lid for his first DNF of the season. All driver involved were unharmed.

Rolling once more, Jake had Dustin Morgan and Blake Hahn in tow with neither able to mount a charge. Under caution on Lap 10 for Matt Covington, the restart again saw the No. 74b take off from the field. With the green continuing to wave, the long run allowed the leaders to run down the back of the field.

Navigating around the back-markers, Jake was able to put a couple slower machines between himself and Dustin Morgan. Finally clearing the lapped cars with a handful of laps to run, it was not enough to deny Jake Bubak the victory; crossing 2.687 seconds ahead of the Ark Wrecking of Oklahoma No. 93.

Challenged a couple times throughout the feature by Blake Hahn, the runner-up by Morgan is the Oklahoman’s best finish of the season thus far. Blake Hahn third also marks a season best thus far in National Tour competition. John Carney II moved from eighth to fourth in the Lubbock Wrecker Service No. 11x with Wayne Johnson coming from 10th to round out the top-five in the Outlaw Wings No. 2c.

With night one of the Lucas Oil ASCS Sizzin’ Summer Speedweek in the books, the series heads to Amarillo, Texas on Saturday, June 10, 2017 and Route 66 Motor Speedway. Sam Hafertepe, Jr. was top dog one year ago at the three-eighths mile oval.

Heat Races: (All entrants advance to the A-Feature)