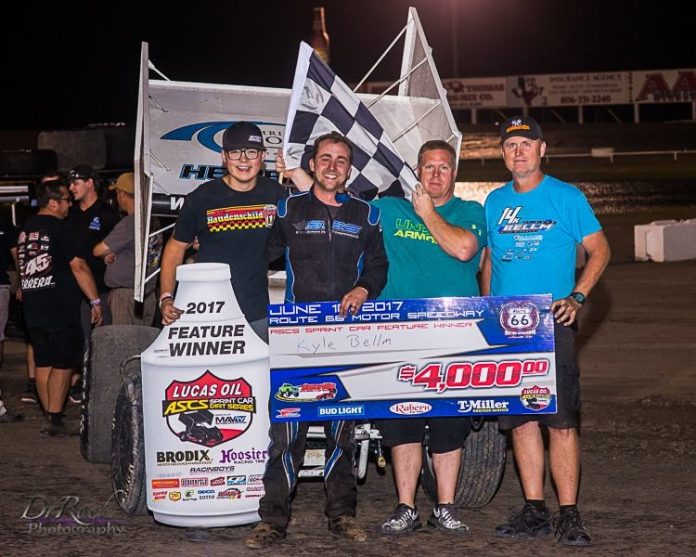 “Man, what a day,” chuckled the driver of the R.A.M.S. No. 14k. “It’s been a long time since I stood in National Tour Victory Lane, it’s been a year since I won an ASCS Regional race, so we we’re pretty hard up for one. You know, Hahn’s a great driver, his tire just let go. I was doing everything I could to keep the car straight. I knew it was going to be that kind of race.”

Gridding the field third, Bellm protected the position as the track moved from the high grove to the middle with rubber starting to set in, a restart on Lap 7 after Sam Hafertepe, Jr. lost his left-rear tire, Bellm was looking at the rear bumper of John Carney II who trailed Blake Hahn for the lead.

With the focus on keeping the car as straight as possible, Hahn was able to keep Carney at bay as the pair began finding the tail of the field. Giving the No. 11x a chance to close within striking distance, Bellm continued to hold his position in third.

Slowed again on Lap 16, the top three remained unchanged as further back, drivers worked to hold the narrow racing groove. To the final five laps, tires began to smoke heavily as drivers began putting a little more leg into it. Running the No. 52 down, John Carney II moved by Hahn off the fourth turn on Lap 21, but the lead would disappear as fast as it appeared with Carney’s right rear coming apart.

Advancing Hahn back to the point with Bellm in tow, it was all about survival. To the white flag, Bellm began to pressure the No. 52. Edging low on Hahn, the lead was within Bellm’s grasp with the top spot eventually dropping right into his hands as Hahn’s tires retired.

Advancing the No. 14k to the point, Bellm raced under the checkered flag as a massive crash broke out on the back stretch. All drivers involved were unharmed. With Bellm crossing under the checked flag, the race was official. .Johnny Herrera ended up second in the MVT No. 45x from sixth with Matt Covington coming from eighth to third. Wayne Johnson was fourth with Josh Baughman advancing from 12th to complete top five.

Seth Bergman was sixth with Skylar Gee seventh. From 13th, Aaron Reutzel came up to eighth. Earning the CP-Carrillo Hard Charger of the Night, Justin Henderson rolled to ninth after starting 19th with Paul Solomon tenth.

Three Heat Races went to Jake Bubak, Johnny Herrera, and Seth Bergman. No provisional starts were utilized. The Lucas Oil ASCS National Tour presented by the MAVTV Motorsports Network heads for the next round of Speedweek on Tuesday, June 13 at the famed Devil’s Bowl Speedway in Mesquite, Texas. More information on the event can be found at http://www.devilsbowl.com.

Heat Races: (All entrants advance to the A-Feature)