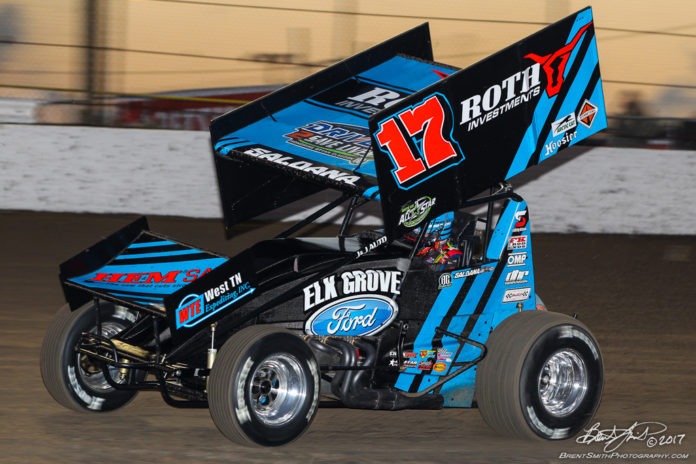 EAGLE, NE – Indiana is home for Joey Saldana, but for the rest his family, Nebraska is where they originally hail from. Lincoln to be exact. That makes visiting the Cornhusker state always special for the second-generation driver, especially when he gets the chance to compete at Eagle Raceway.

Saldana and his fellow World of Outlaws Craftsman Sprint Car Series competitors will return to Eagle Raceway for the first time since 2012 on Tuesday, June 13 for the running of the Eagle Nationals.

“Eagle is not my home track, but it’s my family’s home track,” said Saldana. “My whole family, my Mom, my Dad and my sisters are all from Lincoln, Nebraska. We haven’t raced at Eagle for a while and the times we’ve raced there we have had some success. I’m definitely looking forward to it. It’s a cool track and always puts on a good show. It’s good short track racing.”

Saldana, who won at Eagle in 2007 with the World of Outlaws Craftsman Sprint Car Series, has made 29 starts with the series at the track, dating back to 1996. He has 20 top-10 finishes at the third-mile, high-banked bullring, with 12 of those being top-five performances. Saldana has finished sixth or better in three of his last four appearances at Eagle Raceway.

“You would like to think that you could fall back on your past notes and have something that you could relay and bounce things off,” explained Saldana. “This year, though, for our Stenhouse/ Wood team, it seems like we have been struggling to find a balance with the car. Everything we have tried that we have done in the past, doesn’t seem to be working. I don’t know what you need or how you need it, but we are definitely learning every single race.

“It’s hard to takes things from your notes in the past and translate that to today. Gear, stagger and stuff like that translates, but your bars, wings, shocks and things like that have definitely changed a lot. The shock packages guys are doing now have changed tremendously. If you are not on top of it, you are going to be in trouble. Right now we are trying to find that balance. Hopefully some of the notes we have will translate into what we are going to do at Eagle. The track is a fun place to race and if you are positive and mentally-prepared for it that definitely helps a lot.”

Over the course of the nine races leading up to the Eagle Nationals, the World of Outlaws Craftsman Sprint Car Series will have competed on seven tracks that are considered “big tracks.” Eagle will mark the first true “short track” race since the middle of May.

“You definitely have to race your cars different,” noted Saldana of smaller tracks. “On the big tracks, as a driver, you don’t want to move your hands a lot and scrub speed. You try to keep your car as straight as possible and always going forward. When you get to a smaller track, you have to throw your car around a lot more and it’s a totally different style of racing. On a little track you move your car around more. As a driver it’s definitely different. On the smaller tracks it’s a lot more technical. On the big tracks, it’s being more patient, focused and hitting your marks. It’s definitely a different mindset and I enjoy them both.”

Saldana, who is in his first season driving the No. 17 for the Stenhouse Jr./Wood Racing team, has 99 career A-Feature wins with the World of Outlaws Craftsman Sprint Car Series. Only five drivers in the 40-year history of the series have won more than 100 main events.

“For me, it’s going to be massive,” said Saldana of the 100th win. “To say you’ve won 100 races with the World of Outlaws is an amazing feat. For myself, I never felt like I was an all-around blessed race car driver like Steve Kinser, Donny Schatz, Sammy (Swindell), Mark Kinser and Doug Wolfgang. Those are the five guys you chase, but I never put myself in their category. To say that I’ve won 100 races, for myself mentally, if and when it happens, it will be a big accomplishment. I’m definitely grateful to have gotten to do what I’ve done.”

With the heart of the season in full effect, Saldana’s main goal is to help the Stenhouse Jr. /Wood Racing team earn their first World of Outlaws Craftsman Sprint Car Series win. The team is co-owned by NASCAR driver Ricky Stenhouse, who cut his teeth racing sprint cars, along with businessman/car dealer Matt Wood.

“We need to get that win,” Saldana said. “It’s not going to be easy. The teams out here racing are very in-tune with what is going on. To be able to say you’ve won an Outlaws race you have to be on your game. You have to be spot-on all night and when you accomplish that, it’s a great feat. Hopefully we can do it more than once and win a few races.”

Saldana currently sits ninth in the World of Outlaws Craftsman Sprint Car Series standings, less than 50 markers out of the eighth spot, as he looks to move forward. The veteran driver has a season-best finish of fourth on three separate occasions, all on half-mile tracks. Saldana has also been fastest in time trials twice this season, including most recently during the 39th Annual AGCO Jackson Nationals at Jackson Motorplex in Minnesota.

“Hopefully we can move up a few spots in points,” said Saldana. “Obviously, the top-five in points are pretty elite teams and have their stuff together. I realize this is a first year team and it’s take a lot of work and focus. We are doing everything we need to do to be competitive. It’s just hard, because the competition is so great out there. It’s hard to get everything going in the right direction, but you just can’t give up on yourself and you can’t give up on the team. Everyone needs to be positive and we are doing that.”

Tickets for the Eagle Nationals at Eagle Raceway in Eagle, Neb., on Tuesday, June 13 can be purchased online at https://slspromotions.ticketforce.com and at the track on race day. Fans can also save $5 on General Admission tickets, when purchased at a participating NAPA Auto Parts store. Tickets buyers will exchange their NAPA receipt for tickets at the Main Grandstand ticket booth on race day.