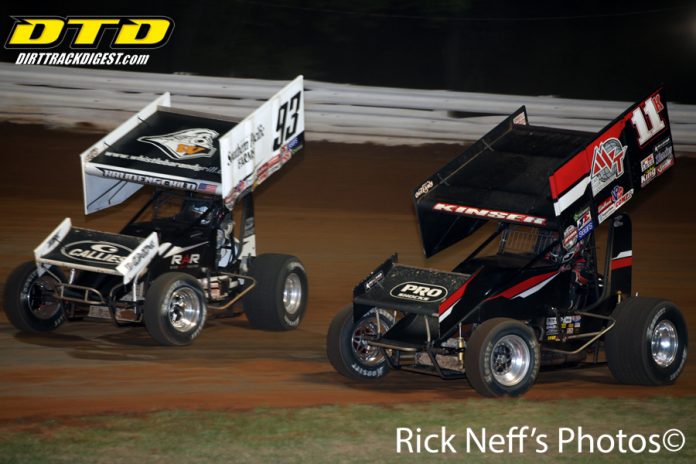 The track
Red River Valley Speedway is a high-banked, three-eighths-mile that was formerly a half-mile. The track record of 12.566-seconds was established by Joey Saldana on June 17, 2012 on the new configuration of the track.

Steve Kinser, the 20-time series champion, leads all drivers with 16 overall wins at Red River Valley Speedway. Kinser won nine A-Feature events and seven preliminary features. Fellow Hall of Famer Sammy Swindell, who won the most recent Outlaws race at the track in 2012, is next on the list with 14 totals wins, split evenly between A-Features and preliminary features.

Former series champions Jason Meyers and Danny Lasoski were both victorious at Red River Valley Speedway, when it was a half-mile.

Double Duty
Donny Schatz will also compete in his late model with the Northern Late Model Racing Association (NLRA) at Red River Valley Speedway, as well as the night before at River Cities Speedway in Grand Forks. Schatz swept both the World of Outlaws and NLRA races at River Cities in August of 2013. Schatz raced his late model last week in Winnipeg, picking up a top-10 finish.

Plenty of starts
Jason Sides, Paul McMahan and Shane Stewart have each raced nearly 20 times at Red River Valley Speedway in their respective careers. McMahan has seven top-10 finishes at the track, while Sides has six and Stewart five. Sides leads the trio with a best finish of second in 2007.

Return visit
Greg Wilson, the defending Kevin Gobrecht Rookie of the Year Award winner, made a pair of starts at Red River Valley Speedway in 2006, finishing 15th in each of those races.

On the podium
Brad Sweet and David Gravel both raced at Red River Valley Speedway in 2011 with the Arctic Cat All Star Circuit of Champions. Sweet finished second in that event to Donny Schatz, while Gravel finished third. Shane Stewart also competed in that race. Gravel has made a total of four starts with the All Stars at the track and has four top-10 finishes.

Tickets for the Gerdau Recycling Duel in the Dakotas, featuring World of Outlaws Sprint Car Series, along with the Northern Late Model Racing Association (NLRA) at Red River Valley Speedway in West Fargo, North Dakota, on Saturday, June 17 can be purchased online at slspromotions.ticketforce.com or by phone at 815-344-2023, as well as at the track on race day.