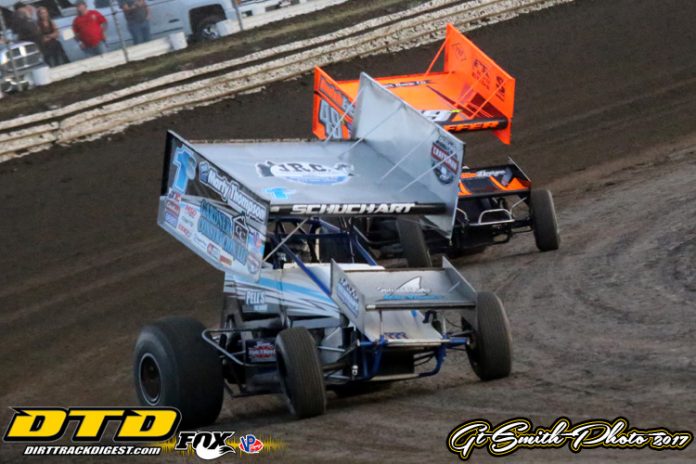 GRAND FORKS, ND – Only two drivers finished among the top-five in both World of Outlaws Craftsman Sprint Car Series events at River Cities Speedway in Grand Forks, N.D., last year. The first? Donny Schatz, the winningest driver with the series at the track and a perennial favorite at River Cities. The other? Logan Schuchart, who finished third, after leading the first 20 laps of the main event in June. The 24-year-old returned to River Cities in August and followed that up with a fourth-place showing.

Schuchart and his fellow World of Outlaws Craftsman Sprint Car Series competitors return to the always thrilling high-banked bullring this week for the 1st Leg of the Gerdau Recycling Northern Tour on Friday, June 16.

“We had some good runs and were really fast there last year,” said Schuchart. “I really like the track, though, I don’t know if I would say we have it figured out. It’s hard to be that consistent with the World of Outlaws, because everyone is so good. It’s a track that everyone goes to every year, so everyone has good notes for it. Hopefully we can finish as good as we did last year, if not better. We led a lot of laps there last year, so I would like to get a win there.”

The native of Hanover, Pa., made his debut at River Cities Speedway in 2014, which was his rookie season on the World of Outlaws Craftsman Sprint Car Series circuit and instantly took a liking to the venue. The series has been visiting the River Cities Speedway since 2007, which has become a favorite of drivers, crews and of course, fans.

“It’s one of the most fun race tracks we go to,” he noted. “I think most of the drivers in the pit area would tell you that. It’s great for the fans and great for the drivers. We look forward to going there.”

Schuchart earned his first career World of Outlaws Craftsman Sprint Car Series win last July at Cedar Lake Speedway in Wisconsin. He has added four more wins since to bring his tally to five Outlaws victories. Schuchart scored a very popular win last fall in his home state of Pennsylvania at Port Royal Speedway. This season, he has been victorious at Kings Speedway in California, the famed Eldora Speedway in Ohio and the Dirt Track at Charlotte on Memorial Day weekend.

“Wins out here are never easy,” explained Schuchart. “These guys are tough. Once you get a win, it puts some confidence behind you and makes you race even harder. You feel like you have a race car that is capable of winning that helps with both confidence and how you drive the car. We have a good team and we have fast race cars. Just putting it all together is the main thing.”

One of the biggest challenges that Schuchart and his Shark Racing team, which is owned by his grandfather, Hall of Famer Bobby Allen, have faced this season is finishing races. While they have been fast, seeing the checkered flag has proved elusive on a number of occasions. Schuchart currently is ninth in the series standings with 13 top-10 finishes, of which seven are top-five performances.

“We haven’t been as consistent as we’d like,” shared the young driver. “We have to be a little more consistent and make the right calls and I think we can be up front. We have been falling out of too many races if we are looking at points. We have won three races, so we are fast, but we have fallen out of probably six, seven or eight races.

“To run well with the World of Outlaws, be consistent and be up there in points, you can’t fall out of races. It’s definitely something we need to work on. With money and getting new stuff is how you eliminate some of that. The guys do a great job doing maintenance on the cars during the day and keeping the cars from falling apart. We have old parts sometimes and you can’t help that stuff from breaking. You just have to keep re-filling your parts with newer things so it doesn’t break next time.”

With the heart of the schedule in full effect and the World of Outlaws Craftsman Sprint Car Series beginning a stretch that will see them race at least three times a week just about every week for the next two months, Schuchart his team are looking for that right balance as the temperatures warm up and tracks slick off.

“We have to make our car go good on the slick race tracks,” stated Schuchart. “We’ve been decent at that in the past and we have to work on that for the summer months when the tracks are slick. We need to qualify well and then de-tune the engine so they fit the race track when it gets slick.”

To be in contention at River Cities Speedway or any track for that matter, Schuchart is quick to point out the important of time trials to open each race night. A byproduct of timing in well is starting closer to the front of a heat race and having a better chance at getting into the dash, which he has done a handful of times, including in two of the three races he has won this season.

“You have to qualify good,” Schuchart said. “If you do that, you’ll be starting up front. It makes your night a whole lot easier if you can be up front. If we qualify well and put ourselves in a good position in the heat races, we should be good to go.”

Tickets for both legs of the Gerdau Recycling Northern Tour for the World of Outlaws Craftsman Sprint Car Series events at River Cities Speedway on Friday, June 16 and Friday, August 18 can be purchased online at slspromotions.ticketforce.com or by calling 815-344-2023. Tickets can also be purchased at the River Cities Speedway track office, area ticket outlets and at the track on race day.