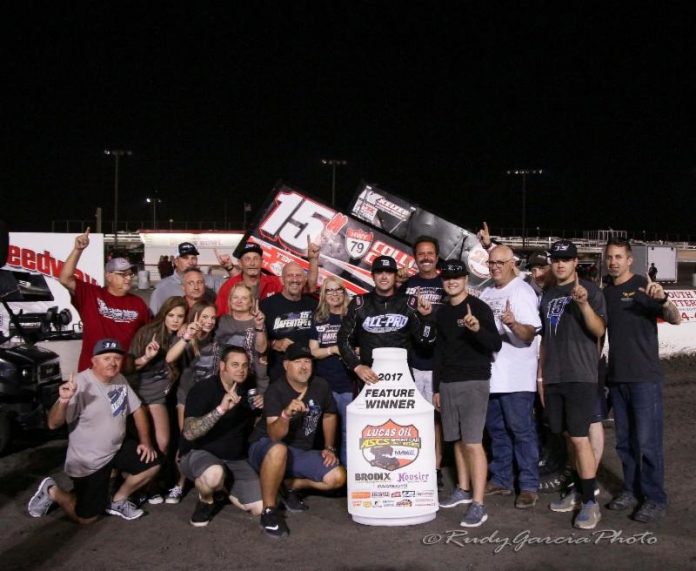 MESQUITE, TX – Four ASCS sanctioned visits to the Devil’s Bowl Speedway in 2017, and just as many wins to show for it, Sam Hafertepe, Jr. rebounded from a weekend of DNF finishes with a dominating performance in Round 3 of the 2017 ASCS Sizzlin’ Summer Speedweek, leading non-stop in the 44th Devil’s Bowl Summer Nationals with the Lucas Oil American Sprint Car Series presented by the MAVTV Motorsports Network.

“We had to do some frame repair to this thing after I got on my lid on Friday night, but I’ve got to thank Triston Dycus. Whatever it takes to keep us going, he does what he has to do. He was supposed to race tonight, so I feel bad because I’m probably half the reason he didn’t race, but you can’t replace friends like that,” said Hafertepe of his sixth National Tour victory of the season.

Career victory No. 5 for Sam Hafertepe, Jr. at the Devil’s Bowl Speedway since 2011, Sam has eight overall ASCS wins on the 2017 season.

“I know what my car can do here. I feel like I’ve made a million laps here and it showed tonight, but my hats off to my crew. I know I chew their asses a lot, but I want them to be perfect. We try to be perfect every night, and they’ve busted hard the past two days, so this win is for them.”

Running to a Heat Race win, the Hwy. 79 Collision No. 15h made the redraw with a runner-up starting spot for the A-Feature. Rolling green next to Dalton Stevens, the race into the first two turns when the way of Hafertepe.

With a nearly straightaway advantage built within the first five laps, the back of the field was already in view. Picking his way through slower traffic, the tiptoe moves seemed to do little to slow the Lucas Oil ASCS National Tour point’s leader.

Slowed once on Lap 15 for Justin Henderson who came to a stop just off the top of the third turn with a broken Sway Bar, the lineup found a pair of lapped cars between Sam and second place, Aaron Reutzel.

Racing for the runner-up spot on the closing lap, things got a little more than close between Dalton Stevens and Aaron Reutzel as wheel to wheel contact between the two sent the No. 87 off the track in the first and second turns, allowing the No. 99x to take second in his first Lucas Oil ASCS National Tour A-Feature start.

Matt Covington also benefited from the contact to take over the final podium step as Reutzel was shuffled back to fourth. From 10th, Seth Bergman made his way through the field to complete the top-five.

Advancing 12 positions after having to race through the BMRS B-Feature, El Paso’s John Carney II was the CP-Carrillo Hard Charger of the Night. Skylar Gee crossed seventh with Blake Hahn eighth from the 16th starting spot. Ninth went to Dustin Morgan with Wayne Johnson crossing tenth.

The 2017 ASCS Sizzlin’ Summer Speedweek and Bob Westphal Memorial Cup continues on Wednesday, June 14, 2017 at Lawton Speedway in Lawton, Okla. Hot Laps begin at 7:45 P.M. (CDT). For continued updates on the American Sprint Car Series, from the National Tour to any of the seven regional tours that make up the ASCS Nation, log onto http://www.ascsracing.com.