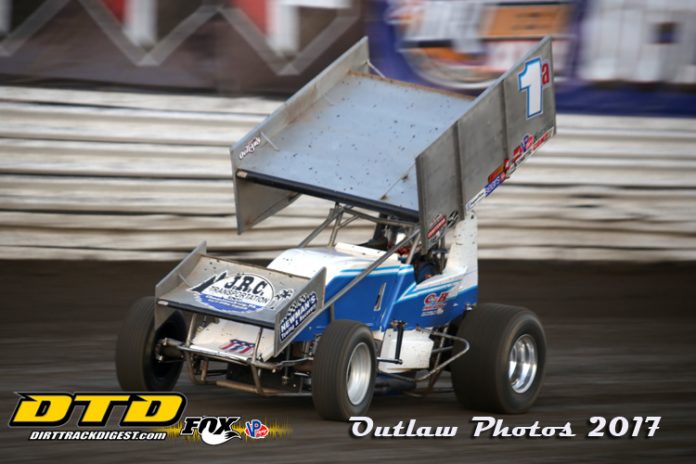 WEST LIBERTY, IA – During his first couple of years on the road with the World of Outlaws Craftsman Sprint Car Series, just about every track was a new one for Jacob Allen. Now in year-four with the Outlaws, the number of new tracks he visits each season can usually be counted on one hand. He will encounter a new venue on the schedule this week as the series heads to West Liberty Raceway in Iowa for the first time.

The inaugural West Liberty Hawkeye 25 for the World of Outlaws Craftsman Sprint Car Series at West Liberty Raceway is set for Friday June 23. Along with a full night of racing for the Outlaws, Modifieds will also be on the card.

“Since no one has ever been there we are all on the same playing field,” said Allen. “Going to new tracks is something that I’m very used to now. That’s part of the deal of being out here racing with the Outlaws, so it’s nothing new. We get used to it and it’s fun to go to new tracks and see new places.”

West Liberty Raceway is a sprawling half-mile, located at the Muscatine County Fairgrounds. Over the course of the last 12 races, the World of Outlaws Craftsman Sprint Car Series has competed eight times at tracks that would be considered “big tracks,” mainly half-miles, but also a seventh-sixteenths-mile and a fourth-tenths-mile. Allen got his first taste of big tracks early in his career in Central Pennsylvania.

“I feel pretty comfortable on the big tracks,” shared Allen. “We have a lot of those back home in Pennsylvania, but I have probably run more on big tracks with the Outlaws than I did when I was back racing there. By running at Knoxville (Raceway), Jackson (Motorplex), Eldora (Speedway) and places like that, it gets you ready for all the bigger tracks. The speed is fun for me at those big tracks and I look forward to going to them.”

Allen picked up his first-career win in a 410-sprint win last fall at Susquehanna Speedway in Pennsylvania, following the conclusion of the World of Outlaws Craftsman Sprint Car Series season. Allen led all 30 laps of that main event, holding off two of Central Pennsylvania’s best drivers in the process. Current Outlaws rookie contender Brent Marks finished fourth in that race.

“Winning at Susky was great,” he said. “Lance (Dewease) ran second and (Greg) Hodnett was third, so to win over those guys was pretty huge. Those guys are the ones usually contending for Outlaws wins when we race back home, so to come off of the Outlaws season and win there going into the off-season really was a confidence booster. That got me very excited for this season and trying to get that first Outlaws win.”

Last weekend, Allen won the Craftsman Club Dash to earn the pole at River Cities Speedway in North Dakota and led the first four laps of the main event. That marked the first time he led laps in a feature event in his young career with the World of Outlaws Craftsman Sprint Car Series. While getting that first Outlaws win in a big goal of his, continuing to add to his knowledge-base, by observing the veteran drivers and teams and how they operate, is a key element for Allen.

“You learn every day out here with the Outlaws,” Allen noted. “I feel like my focus is a lot better and you keep watching and studying how people do things on the road. You watch what the good guys do and try to learn what it takes to be one of the best. I pay attention to that and try to go out each night and get closer to that goal.”

Allen drives for Shark Racing, a team that is owned by his father, Hall of Famer Bobby Allen, one of the original Outlaws. Along with the father/son duo, Logan Schuchart, Bobby Allen’s, grandson drives for the team. The trio travels the country together and races both cars out of the same trailer. For the younger Allen, he wouldn’t trade getting to race with his dad for anything.

“It’s the best racing with my dad,” said the second-generation driver. “I couldn’t ask for anything better than to be with my dad. He makes it really easy on me to go out there and drive. I tell him if I am loose or tight and he gives me what is the best feel for me in the race car. He watches and knows where my comfort is on certain tracks and on certain surfaces. I’m really lucky and I feel like I am learning how to do things right, by being with my dad every night at the track.”

Tickets for the inaugural West Liberty Hawkeye 25, featuring the World of Outlaws Craftsman Sprint Car Series inaugural at West Liberty Raceway in Iowa on Friday, June 23 can purchased online at slspromotions.ticketforce.com or by calling: 815-344-2023 and at the track on race day.