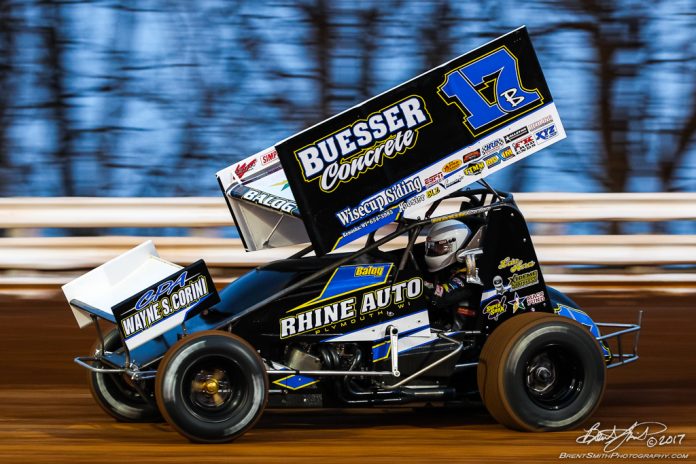 BEAVER DAM, WI – Bill Balog has won quite a few races in his adopted home state of Wisconsin, over the years. One he’ll never forget was the 2016 edition of the Jim “JB” Boyd Memorial at Beaver Dam Raceway, which was his first career World of Outlaws Craftsman Sprint Car Series win.

“It was huge to get that win,” said Balog, when reflecting on his World of Outlaws win. “People will still shoot me a message every now and then, asking about it and saying, ‘Remember that night’ and stuff like that. Things definitely have to go right to get an Outlaws win, especially for a smaller team like ours. Everything went right that night and we had a fast car, so everything fell into place. I would definitely like to do it again at Beaver Dam and other tracks.”

Balog has been gearing up for the World of Outlaws Craftsman Sprint Car Series return to Beaver Dam Raceway for the last several weeks. Part of that preparation was racing a few times less to make sure his engine was fresh and all of his equipment ready to go.

“I’ve kind of been saving the car for Beaver Dam,” noted the multi-time IRA champion. “I was going to go to a few other races and figured I’d probably blow up the motor I wanted to use and stuff like that, so I decided to just park it for a couple of shows.”


Balog, who has turned more than his fair share of laps at Beaver Dam Raceway in his career, has already won twice this season with the IRA at Beaver Dam Raceway. He won on April 22 and returned to victory lane at the high-banked third-mile a few weeks later on May 13. Balog also has IRA wins this season at Angell Park Speedway in Sun Prairie and ABC Raceway in Ashland, Wisconsin.

“I guess if there was such a thing as a home track advantage, you could say I have one at Beaver Dam,” he shared. “I’ve been running good there. Our car just seems to work really well there. We use a standard package there and it seems to work. We have this one Kistler engine, in particular, that just seems to be able to keep the tires under it really well. It’s the Outlaws, though, so they figure it out in hot laps. The more the laps better. I’ll take any type of advantage I can get.”

Balog has been travelling a bit more the last few seasons and has raced with the World of Outlaws Craftsman Sprint Car Series at a number of venues he had never been to in the past. He is quick to point out that a completely different approach and level of intensity is required when racing the Outlaws. Balog even spent a couple of weekends this spring racing in Central Pennsylvania at the famed Williams Grove Speedway and Lincoln Speedway, racing against the tough weekly competitors there.

“Sometimes around here when we race, we are on the defensive side,” said Balog. “When you race with the Outlaws you have to be 100 percent on the offense. Those guys will just run you into the ground and stomp you. Knowing that before the green flag comes out, helps you adjust how your drive and you get after it, otherwise if you wait, it’s too late and it’s over. Racing with the Outlaws definitely makes you a better driver. We’ve been trying to travel as much as possible and it’s been helping us.”

Last season at Beaver Dam in the Jim “JB” Boyd Memorial, Balog started on the outside of the front row, next to Daryn Pittman, the 2013 World of Outlaws Craftsman Sprint Car Series champion. Pittman led the first two laps, with Balog moving to the point on third circuit and staying out front for the remainder of the 40-lap main event to take the $10,000 top prize. He was sixth-fastest in time trials and finished second in the third heat race to earn a spot in the Craftsman Club dash. Balog is quick to point out that timing in well and getting in the dash are two big keys to having a chance to contend for a win with the Outlaws.

“Like any other night, you have to draw well,” Balog said. “With the way the format is, qualifying well is very important. Getting in the dash is a key to having a shot at a win as well. Really, for everyone, things have to fall in place. It would be neat to have another night like last year, but the main thing I am looking for is a good finish.”

A pre-race Tailgate Party, featuring Rob & The Rest, playing “Old Time Rock N Roll,” will start at 3 p.m. on race day in the Trackside Concession area at Beaver Dam Raceway. Grandstand gates will open at 2:30 p.m. for the Tailgate Party.