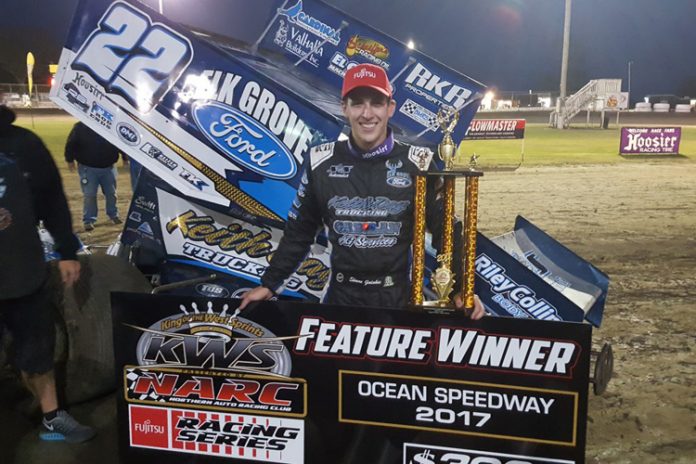 Golobic became the seventh different winner in nine KWS-NARC races this season after claiming top honors in the Pombo-Sargent for the second consecutive year. He was piloting the potent Keith Day Trucking/Elk Grove Ford-sponsored sprint car.

Johnson outgunned Bud Kaeding in a wild first lap to take the point as the field quickly sorted itself out behind him. Kaeding jumped the cushion in turn two the next time around and the third starting Golobic slid into the runner-up spot, chased by Eliason and fast qualifier Justin Sanders.

A caution period on lap seven for a spun car bunched up the field once again. The top three battled inches apart before Golobic squeezed past Johnson coming out of the fourth turn, only to lose the advantage in the second corner. Golobic took the lead for good on the 10th circuit, but not without several challenges by a stalking Eliason.

Another caution slowed the field on lap 16, giving Eliason another solid shot at Golobic. However, Golobic expertly sliced and diced his way through slower traffic and held on to secure the victory.

“Everything the crew gave me tonight worked perfectly,” said Golobic. “It was also nice to score this win on my father’s (John Golobic) birthday.

Justin Sanders, who started sixth in the Vontrex Keizer Wheel Maxim powered his way to fourth on lap 14, third on lap 20, and took advantage of Eliason jumping the cushion with four remaining to secure second. Eliason wrestled the Good Guys/Fuel Curve sprinter back into shape and crossed the checkered in third.

Kaeding finished fourth in the Williams Motorsports Maxim. In the process, he regained the KWS-NARC championship point lead from Gio Scelzi. Kaeding now has 523 points, followed closely by both Scelzi and Eliason who are both tied up with 519.

Australian Jamie Veal, DJ Netto, Michael Kofoid, Gio Scelzi, and Nathan Rolfe were the next five across the finish line. It was Rolfe’s first top 10 finish of the season.

Heat races were picked off by Johnson, Eliason and Netto.