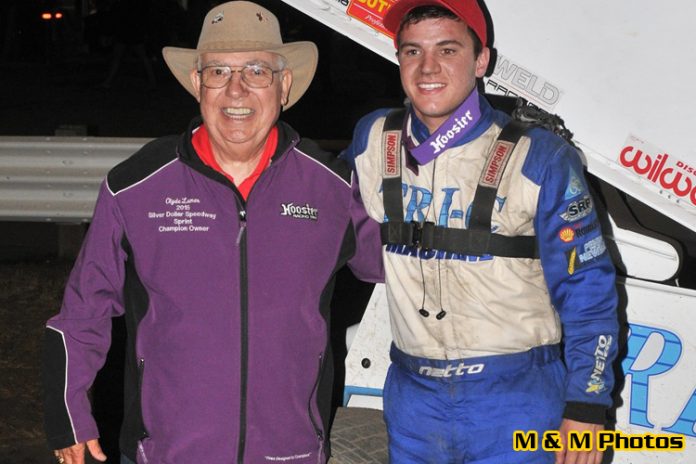 CALISTOGA, CA – DJ Netto drove a solid 25-laps and found himself at the right place at the right time to claim top honors in Saturday’s King of the West-NARC Fujitsu Sprint Car Racing Series Dirt Classic before a capacity crowd at Calistoga Speedway.

The event, which was co-sanctioned by the Sprint Car Challenge Tour, raised an amazing $250,000 for the Boys & Girls Club of St. Helena and Calistoga.

It was Netto’s first career victory at the half-mile oval and the 16th for longtime car owner Clyde Lamar. It made the Netto Ag/Tri-C Machine team the eighth different winner in 10 series races this season.

This feature was filled with late race drama as bad luck knocked out the top two frontrunners who managed to dominate most of the contest. However, Netto had to fight some mechanical challenges of his own, as his sprinter suffered a broken right front shock after tagging the wall on the first lap.

Hoosier Tires dash winner and polesitter Michael Kofoid appeared to be the class of the field from the initial green. The 15-year old driver jumped out to a commanding lead over Netto, Rico Abreu and Australian Jamie Veal in the early going. Netto and Abreu locked horns as the pair diced through lapped traffic on the fifth circuit. Netto maintained that advantage until Abreu took the lead on lap 14 as the pair powered out of the fourth corner.

Abreu in his familiar Abreu Vineyards ride began to steadily reel in the leader until he spun out in the second turn on the 20th circuit. The culprit was a flat left front tire. As the field slowed for the caution, Kofoid discovered he had cut a left rear tire and pulled into the pit area for repairs. This handed the point to Netto for the final five lap sprint to the checkered.

Shane Golobic, who started seventh in the Keith Day Trucking/Green 1 sprinter made a couple of attempts to get past the leader on the restart, but had to settle for second.

KWS-NARC championship point leader Bud Kaeding started third, fell back as far as sixth in the early going, before rebounding to finish third in the Williams Motorsports Alviso Rock Maxim.

Veal brought out the only other caution flag on lap 13 with a flat right rear tire.

Eighth starter Kyle Hirst finished fourth in the Roth Motorsports H&R Livestock Trucking KPC chased by teammate Gio Scelzi who tailgated him across the line in the teams other car.

Hirst paced the field in qualifying with a 17.040 second run around the half-mile oval.

Heat races wins were claimed by Netto, Kaeding and Veal.