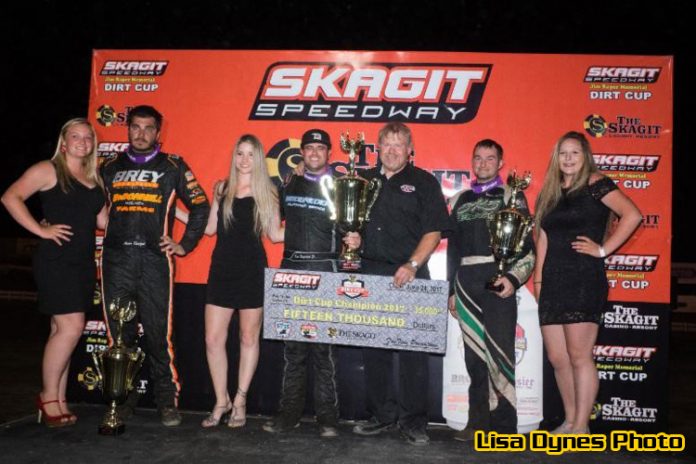 ALGER, WA – Domination might not describe the performance by Sam Hafertepe, Jr. at the 46th Jim Raper Memorial Dirt Cup presented by the Skagit Casino and Hotel, as the Hwy. 79 Collision No. 15 left only seven drivers on the lead lap when all was said and done.

Joined by Dave Argabright on the LucasOilRacing.tv broadcast, the question of Sam’s thoughts on his second win was asked with Sam replying, “Man, I just had to take a second and collect my thoughts on what we did. We went from looking like a rookie on Thursday night to dominating the field the last two nights. It’s a testament to the hard work we put in. Most guys don’t realize the hours we put into this. I like to have fun as anybody, and all these boys in the Pits know it, but when it comes to this hotrod here, there’s nothing second to it.”

Going on to thank his sponsors and crew, Sam also gave a special thanks to Skagit Speedway owner, Steve Beitler.

“I just think you guys need to appreciate Steve Beitler more. He works his ass off to get this place right. We may have had a bad track on Thursday, but he put countless hours in and got us a track that was right on the fence, and you can’t ask for any more than that. There isn’t a lot of $15,000 to win 360cid races, and he does a hell of a job so hats off to him.”

Collecting his second $15,000 payday in as many years, Hafertepe’s ninth win of the season with the Lucas Oil American Sprint Car Series presented by the MAVTV Motorsports Network surpasses his overall win total from 2016 by one, and brings his series total to 24 since 2010.

Rolling to the green fourth on the grid, Sam wasted little time advancing through the ranks. Taking over second on Lap 2 from Aaron Reutzel, the race for the lead quickly followed as Roger Crockett came under fire on Lap 7.

Just getting into traffic, Crockett rolled the bottom on slower cars in the first two turns with the cushion opening clear for Hafertepe. With momentum to his advantage, Sam took over the top spot on the eighth revolution.

Setting sail through traffic, Hafertepe continued to build his advantage with the race for second between Crockett and Reutzel with the former ASCS Northwest Regional Champion able to hold off the No. 87 through Lap 25.

Trailing by over five seconds, and with slower cars blocking his every move, Sam continued to daylight the No. 87 while putting drivers inside the top-ten a lap down. Looking like the 2017 Dirt Cup finale was going to go green to checkered, the race would come to a stop on Lap 36 with Garen Linder going for a tumble in turn two without injury.

Restarting with four lapped cars between himself and Reutzel, Sam easily checked out to a 4.789 second advantage at the checkered flag. Aaron Reutzel second was joined on the podium by Roger Crockett. Fourth went to Jason Solwold after a fierce battle with Blake Hahn who capped his weekend off with a fifth place finish.

Matt Covington sixth was followed by Colton Heath to round out the drivers on the lead lap. Seth Bergman rode eighth with Johnny Herrera earning the CP Carrillo Hard Charger of the night with run from 15th to ninth. Wayne Johnson finished tenth.

The Lucas Oil American Sprint Car Series presented by the MAVTV Motorsports Networks turns to next to Grays Harbor Raceway in Elma, Wash. for the Fred Brownfield Classic on Friday, June 30 and Saturday, July 1. For more information on the event, log onto http://www.graysharborraceway.com.

For continued updates on the American Sprint Car Series, from the National Tour to any of the seven regional tours that make up the over 150 dates across the ASCS Nation during the 2017 season, log onto http://www.ascsracing.com.