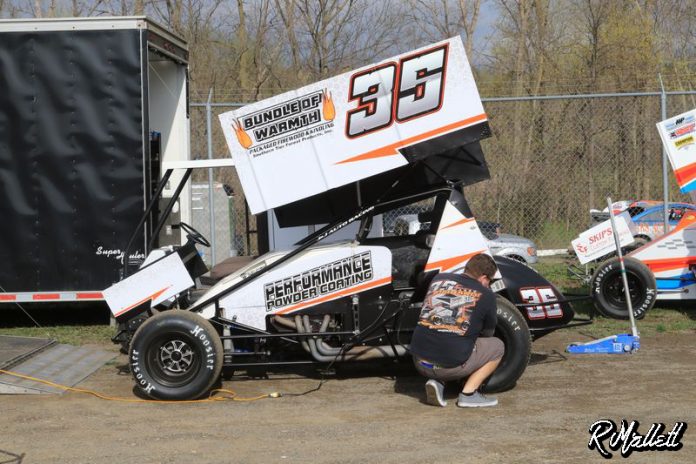 Zimbardi started along side young gun, Jordan Thomas, as the two brought the 17-car field to green, but it was not even a lap in when Steve Collins flipped his No. 67 which would bring out the red flag.

After a complete restart, Zimbardi would begin to build a favorable lead, as the battle for second between Scott Kreutter and Darryl Ruggles would be the best thing on the racetrack.

Zimbardi would at some points have a five second advantage over the rest of the field; that lead was relinquished by a late yellow involving David Just and Cody Bova. The following restart, Josh Azzi spun in turn 3 to bring out another caution flag.

Restarts would not be an issue for the Bradford, PA pilot as he would cruise to the checkers and score his 36th career Series win in front of many local family and friends.

Darryl Ruggles would come home with a career best second place finish as Scott Kreutter keeps it rolling in the Trey Hoddick No. 49 and finishes third. Dan Bennett and Kyle Drum would complete the top five, respectively.

Joe Trenca and his team were not able to compete as they had truck failures on their way to the speedway. Cody Bova was making his second start with PST when during hot laps, the 20b backed into the wall, crushing his rear bumper and fuel cell. The team was able to make repairs and compete for the heat events.

The series continues its Western Swing with the second annual Bonnell’s Collison Centers Western Weekend beginning at the McKean County Raceway on Thursday, June 29, Raceway 7 in Conneaut, OH, on Friday, June 30, and the Mercer Raceway Park on Saturday, July 1. Each race will be paying $4,000 to win, $1500 for second, and $1000 for third. It is also $325 to qualify!