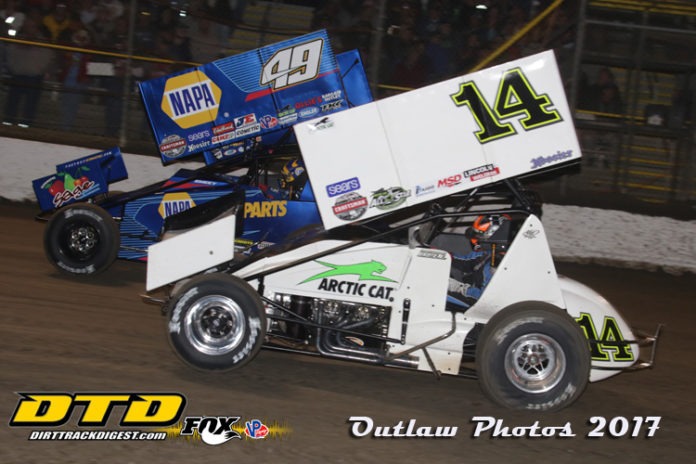 SPRING VALLEY, MN – While he has only made three starts at Deer Creek Speedway with the World of Outlaws Craftsman Sprint Car series, Brad Sweet has made the most of that trio of races. The Californian has a win, along with finishes of fifth and sixth in his three starts at the track. That equates to an average finish of fourth at Deer Creek, which is near the top of the leaderboard in that category among full-time series drivers.

Sweet, who won in the Outlaws most recent event at Deer Creek in 2015, returns to the track in Spring Valley, Minn., just outside of Rochester, this week on Thursday, June 29 for the Asgrow/Dekalb Clash at the Creek. The event will mark the final one of the season in the state of Minnesota for the series.

“Anytime you have a fast car or have won at a track, you look forward to going back,” said Sweet, driver of the No. 49 for Kasey Kahne Racing. “It’s a great facility and always a very racy track surface. It’s smooth and wide and always provides great racing. We’re going to try our best to get our NAPA Auto Parts car back in victory lane up there.”

Deer Creek Speedway is high-banked and drivers carry quite a bit of momentum when they run the top side of the track, but with it being a smaller track, traffic comes into play as well. In 2015, Sweet started second and took the lead from his teammate Daryn Pittman on the third lap and remained out front for the remainder of the 35-lapper. He had to negotiate lapped traffic for a large portion of that race.

“It’s a short track so there is always a lot of excitement and battling,” he noted. “It’s very wide and multi-grooved. The track prep is always very good there, so we definitely look forward to racing there. We had a good mix of big and small tracks recently and Deer Creek, in terms of size, kind of fits in the middle.”

“I think we spent the first little bit of the season just searching,” explained Sweet of the new pairing. “We were both trying to figure out what each other likes and get the car faster. Lucky enough, we hit on a few things and have been really fast lately. We just keep working on our car to fine tune things and get it better. The car has been fast each and every night and that’s all you can ask for out here. We give it our best shot each night and it will be no different at Deer Creek.”

Sweet, who is currently second in points, led the series standings through the beginning of June last season, before ending up fourth in points. He looks to use the knowledge he has learned over the past three seasons to stay consistent and strong through the remainder of the 2017 campaign. Sweet currently the leads World of Outlaws Craftsman Sprint Car Series in top-10 finishes and is second only to point leader Donny Schatz in top-five finishes.

“This is my fourth season out here as a driver and it helps to understand how the whole season works,” Sweet explained. “You can’t be good for just a quarter of it or half of it, you have to be good for all 90 races. Donny (Schatz) always sets the bar pretty high and he’s the guy we are shooting for and David Gravel has been having a good season. The fact that we are right in there is something to be proud of.”

Sweet has reached victory lane four times so far this season, including in two high-paying events. He pocketed $25,000 for winning the 39th Annual AGCO Jackson Nationals earlier this month at the Jackson Motorplex in Minnesota. Sweet also took home $20,000 for winning the Texas Outlaw Nationals at Devil’s Bowl Speedway in Texas in the spring. Sweet is a past winner of the Kings Royal at the famed Eldora Speedway in Ohio and is seeking to add a couple of more marque event wins to his resume.

“These are the months, June, July and August when all the money is on the line and all the big races take place,” said Sweet. “The summer months are when the points are really made up as well. The tracks are a lot slicker and there are bigger car counts at the bigger races. You have to stay consistent through this stretch and I think that’s something I’ve learned over the years. This is the most important stretch. It will be a good summer if we can win a few races through this stretch.”

Tickets for the Asgrow/Dekalb Clash at the Creek, featuring the World of Outlaws Sprint Car Series at Deer Creek Speedway on Thursday, June 29 can be purchased online at slspromotions.ticketforce.com or by phone at 815-344-2023 and at the track on race day.