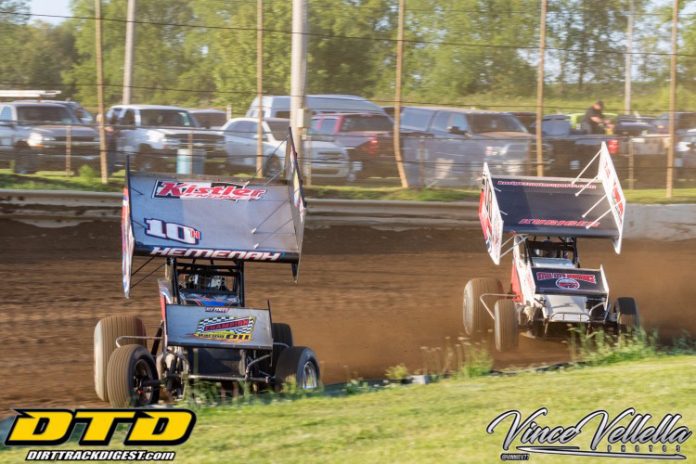 INDIANAPOLIS, IN – Kicking-off the Independence Day celebration a few days early, the Arctic Cat All Star Circuit of Champions will spend the upcoming weekend making appearances in Indiana and Ohio, this time visiting Kokomo (IN) Speedway and Wayne County (OH) Speedway on Friday and Saturday, June 30-July 1.

As previously announced, full-time Arctic Cat All Star Circuit of Champions competitors signed-in for competition at Kokomo Speedway in Kokomo, Indiana, will be given the opportunity to display an Indianapolis Motor Speedway decal during the evening program. Those who choose to display the IMS decal will qualify for Brickyard Bonus Challenge contingencies that will be awarded over the course of the evening. Indianapolis Motor Speedway contingency bonuses include highest finishing feature event car worth $500; second highest finishing feature event car worth $200; the evening’s fastest overall qualifier worth $100; the main event hard charger worth $100; and the highest finishing B-main car worth $100.

St. Helena, California’s Rico Abreu is the most recent Kokomo Speedway feature winner during Arctic Cat All Star Circuit of Champions competition, claiming the Dirt Classic Indiana title in 2016 worth $12,500. Abreu will rejoin “America’s Series” at Kokomo Speedway on Friday evening, set to accompany a loaded roster of winged sprint car aces who will challenge all 15 Arctic Cat All Stars. Tony Stewart, Parker Price-Miller, Carson Macedo, Brandon Wimmer, Sean Zemunik, Kody Kinser, Joe Swanson, Russell Borland, Ayrton Olsen; each expected to battle for the $5,000 winner’s share at Indiana’s baddest bullring. Tony Stewart, former NASCAR Cup Series champion and owner of the Arctic Cat All Stars, will pilot his own Tony Stewart Racing/Rush Truck Centers/No. 14 during his visit to Kokomo, his only winged sprint car start in the state of Indiana this season.

Those who would like to purchase advance tickets for the Arctic Cat All Star Circuit of Champions invasion of Kokomo Speedway on June 30 can do so by visiting: http://tickets.ticketforce.com/eventperformances.asp?evt=1528. General Admission: $25; Reserved seating (top ten rows of main grandstand): $30; Children 10 years and younger will be admitted into general admission for free. All tickets will also be available at the track on the day of the event. Pit passes are $35.

Wayne County Speedway will open pit gates at 2:00pm on Saturday, July 1. Main gates will follow at 3:00pm. General admission tickets are $15. Pit passes will be available for $35. Those seeking additional news and notes should visit Wayne County Speedway live on the Web at www.waynecountyspeedway.com.

As an added bonus, fans that can not attend the upcoming weekend events are invited to watch online via www.thecushion.com. A live, pay-per-view broadcast will be available for purchase featuring action from both Kokomo Speedway and Wayne County Speedway.