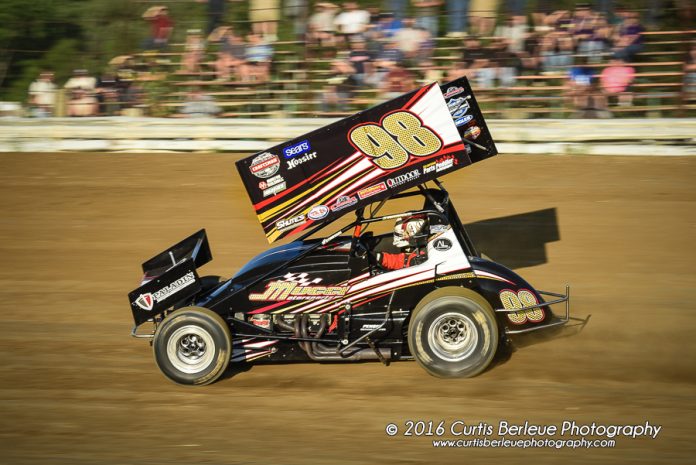 The Patriot Sprint Tour has held four previous events at the 1/3 mile McKean County Fairgrounds oval, with Dane Lorenc taking the win most recently on August 30, 2014.  Other event winners include Chris Shuttleworth (July 8, 2006), Scott Kreutter (August 4, 2012) and Bryan Howland (May 24, 2014).

The tour will then move southwest to Raceway 7 in Conneaut, OH the following night, Friday June 30, for round two of the weekend.  This will be the second of two visits to the Ohio facility for the winged warriors in 2017.  Earlier this season Jared Zimbardi picked up the win over Steve Collins and Bryan Howland.

The third and final night of the 2017 Western Weekend will take place at the Mercer Raceway Park in Mercer, PA.  In 6 Patriot Sprint Tour A-Main events contested at the facility, there have been no repeat winners.  The only active Patriot Sprint Tour drivers with a victory at the 3/8 mile fairgrounds are Jared Zimbardi (May 31, 2014) and Kyle Drum (July 2, 2016).

All A-Main events this weekend will pay $4,000 to the winner and $325 to start thanks to Scott Bonnell of Bonnell’s Auto Group. Contingency prizes will also be awarded by Paul Cole of SuperGen Products/Champion Power Equipment, located in Newark, NY. As with each Patriot Sprint Tour event, Evingham Site Excavation will sponsor the Four Laps of Fame dash, and cash awards will be presented by Casey’s Truck Salvage (salvage of the night award), Shuttleworth Asphalt Sealing (11th place finisher), and Prestige Pool & Spa (final finisher).