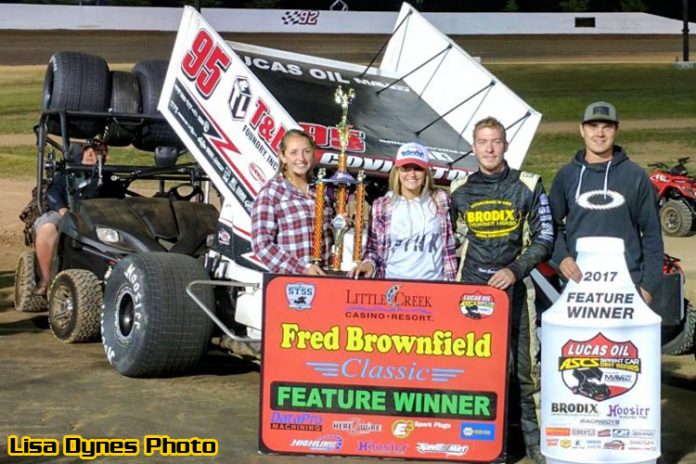 “Tyler’s been doing a really good job with the car. We’re third in points, so we’ve had a lot of good runs this year with top-fives and top-tens, so it was bound to happen,” commented Matt on his fifth career Lucas Oil ASCS National Tour score.

Three attempts at the start of the feature event, a caution for Wayne Johnson who rolled to a stop in turn two was followed by a full stoppage on the next attempt for Garen Linder who flipped in the third turn and escaped unharmed.

Trailing Aaron Reutzel the first two attempts at green, and battling with Sam Hafertepe, Jr. as well on the second attempt, Covington again trailed the No. 87 through the first two turns. Turning down the track off turn four, the A-Rock Material No. 95 of Covington edged out Reutzel at the line to secure the point.

On the battle with Aaron and Sam during the first two restart, Matt said, “We were going at it hard there on the restart before the red came out. It was close, but we were able to hold our own when it was slick and ended up finding the line when Aaron poked a nose under me in turn four. I was already running the rubber in turns one and two, then running the cushion in three and four until about Lap 13, and that’s when I saw Aaron and moved. If I’d run high again, he would have probably gotten by me, but thankfully it worked out and I was able to tuck into the rubber. I raced asphalt a lot when I was younger, so I was pretty comfortable on saving my tires from there.”


While Covington set the pace, the race for second was back and forth between Sam Hafertepe, Jr. and Aaron Reutzel. Swapping the runner-up spot four times, the final swap came on Lap 18 with the advantage to the No. 15h.

On the back bumper of Covington as the pair diced through traffic, Hafertepe eyed a path off the bottom for the lead, but would snag an infield tire instead. Tearing the front axle in half, the suspension folded under the car; flipping the series point’s leader on his side. Sam was unharmed.

Restarting with seven laps to run, Covington quickly stretched his advantage to 1.484 seconds over Aaron Reutzel at the drop of the checkered flag.

Patiently working through the field from seventh, Johnny Herrera brought his MVT No. 45x across the line third. With one final transfer spot into Saturday’s A-Feature, the position went to Roger Crockett who advanced through the lineup from ninth. Posting his best National Tour finish of the 2017 season, Skylar Gee crossed fifth.

The CP Carrillo Hard Charger of the Night was Craig Dollansky and Sam Hafertepe, Jr. was Friday’s FSR Radiator High Point Driver of the Night.