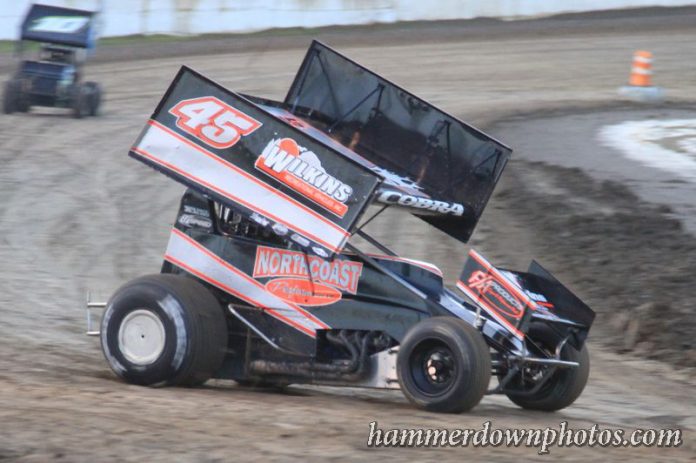 BREWERTON, NY – Mother Nature tried her hardest but officials at the Brewerton Speedway were determined to get in Friday Night’s Donath Motor Worx Central New York Speedweek event for the Lucas Oil Empire Super Sprints.  Although the program was delayed over an hour and a half, the show went on with Chuck Hebing eventually taking the checkers for his second series win of the 2017 season.

Hebing dominated the 25-lap feature on Friday night by leading every lap of the race.  The Ontario, N.Y., driver faced several challenges but was flawless on restarts and in traffic.  Hebing took home over $3,000 for his dominating performance in the NAPA Auto Parts US Tour/SUNY Canton Series feature.  It was Hebing’s second career win at the track known as the ‘D-Shaped Dirt Demon.’

“It’s huge to win and to win at Brewerton (Speedway),” commented Hebing.  “I’ve been coming here since the 90’s.  It’s good.  It’s always good seeing Harvey (Fink) and everyone.  The Wight’s always treat me really good.”

Paul Kinney started on the pole but at the start it was Hebing jumping out in front after starting on the outside of the front row.  He motored by Kinney coming down the frontstretch as the field raced into the first corner on the tacky surface.


Hebing led as Brett Wright’s night ended on lap four as he brought out the red flag.  Wright made contact with another car causing him to slide up the bank and into the outside wall.  His car flipped up into the air and came to a rest on top of the wall in turn one.  He was not injured.

Hebing restarted the race alongside of Kinney for a second time.  Like the initial drop of the green flag, Hebing bolted to the lead beating Kinney into the first corner.   As Hebing beat everyone off the second corner Kinney was forced to deal with the challenges of Paulie Colagiovanni.

“The track was a challenge,” said Hebing.  “You really had to want.  The one restart with Paul I tried to restart on the bottom and I pulled a wheelie and got into him.  I’ve had that happen to me before here.  The next restart I made sure I took the outside so I didn’t get into anybody.”

Hebing’s pace was unmatched early while the duel for second was a good one between Kinney, Colagiovanni and Coleman Gulick.  Gulick pressed the issue above the cushion and grabbled the second spot by the fifth circuit.

Hebing and Gulick were the top two as the yellow flag flew for Sammy Reakes IV on lap eight.  Reakes car slowed before coming to a stop necessitating the yellow flag again.  He was unable to make repairs before the action was ready to resume.

When racing got back underway, Hebing remained at the front of the field as a cluster of cars tried to track him down.  Gulick battled with Colagiovanni for second with Hebing expanding the gap between himself and the race for the second position.

The laps clicked off with Hebing at the front.  As he reached the halfway point he caught the backend of the field.  Hebing worked traffic for a lap but then got a reprieve as the pace slowed again with Kinney stopping in the fourth corner with mechanical difficulties.

Hebing continued his mastery of the restart as he got the jump on everyone another time.  Colagiovanni and Gulick renewed their battle for second with Colagiovanni able to secure the position.

The final challenge for Hebing began on lap 21 as he ran up on the rear of the field again.  He took advantage of the opportunities presented him to put cars down a lap.  As he worked traffic, Colagiovanni was attempted to fend off a hard charging Gulick.  Gulick found a new line above the cushion.  This allowed him to apply even more pressure to Colagiovanni.

“That was the first time I got to lapped traffic that I said to myself, ‘I guess I got to go to the outside and go above the cushion,’” stated Hebing.  “It was rough, but at least I was able to get by them.   It was tough above there.  I was wondering I should have raced up there.”

Hebing beat everyone to the checkered flag with Gulick sneaking by Colagiovanni off the final turn to finish in second.  Had Gulick found the line on the top side earlier he may have been able to challenge Hebing.  Unfortunately it wasn’t to be on this night as he had to settle for a second place finish.

“I found it too late,” mentioned Gulick.  “I think I had something for Chuck (Hebing) if I found it ten laps earlier.  He was killing me on the starts.  He’s been doing this a long time and he’ll mess with your head a little bit.  You got to settle in.  Catching him and passing him is another thing.  I’m just glad to be back up front.  We’ve been struggling the last couple of weeks.”

Colagiovanni ended up in third.  It was his second podium finish of the season.  Colagiovanni was in the mix for a win right up until end.  He had his own mechanical problems to deal with making it difficult for him to see what was going on around him.

“My dad setup the car perfectly, the car was great,” stated Colagiovanni.  “It was just coming into three it was bicycling on me a couple of times.  Those last three laps a line or oil line exploded right in my face.  I was going tear off, tear off.  I couldn’t see anything.   It was a good race by everyone.”

Jonathan Preston ended up finishing in the fourth spot with Mark Smith concluding the night with his third top five finish of CNY Speedweek after he was scored fifth at the finish.

Pit Notes – 30 Sprints were in the pits on Night #3 of Speedweek…Josh Flint and George Suprick made their first appearances of the week…unfortunately for Flint, he was a flip victim in his heat…Brett Wright and Yan Bilodeau also found their way on their wings.