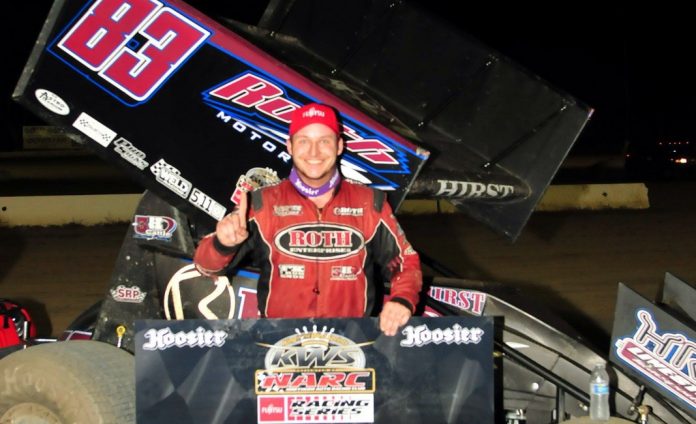 Hirst, aboard the familiar Dennis & Teresa Roth’s H & R Livestock Transportation KPC, started on the outside of the front row but had a hard time trying to shag polesitter Stidham throughout most of the contest.

Riding the top line against a high curb on the multi-groove 3/8 mile track, Hirst nipped Stidham at the flagstand to take the lead after the first lap, chased by point leader Bud Kaeding and Gio Scelzi. Hirst extended his lead to about 10-car lengths until he encountered lap traffic on the eighth circuit. The two frontrunners battled side-by-side in a game of cat and mouse until Stidham powered into the lead firing out of second turn on the 10th circuit.

Teammate Gio Scelzi slid into the hunt and began to pressure Hirst for second in the second Roth Motorsports entry. Hirst began to reel in Stidham again with Scelzi in tow and barely managed to squeeze past Stidham in traffic coming out of the fourth turn. A caution on lap 19 bunched up the field.


Scelzi got around Stidham with nine remaining but then had to contend with sixth starter and fast qualifier Cory Eliason in the potent Antaya Motorsports Fuel Curve-sponsored Maxim. Hirst would end up checking out but Eliason passed Stidham for third on lap 23 and Scelzi with three remaining to score second.

“It feels good to get back here (victory lane) again,” said Hirst, after claiming his second King of the West-NARC feature of the season. “The track was really good and the racing was great. We made a little contact fighting for the lead and I’m just glad we got through it without hurting the car.”

The KWS-NARC championship points race was tightened up even more after round 11 of the 17-race series. Scelzi and Kaeding are now tied for the point lead with 638 points each. Eliason is only two-points back with 636.

The remainder of the top ten included Jace Vanderweerd, Buddy Kofoid, Cole Macedo, Jarrett Soares, and DJ Netto. Kofoid’s efforts were commendable after spinning out on the initial start and restarting at the back of the pack.