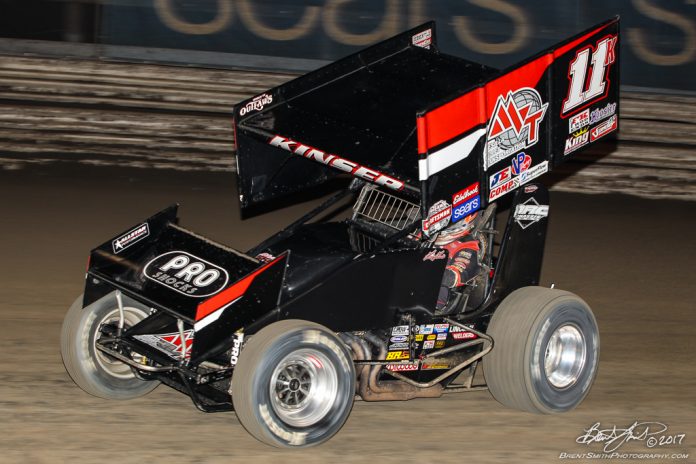 SPRING VALLEY, MN – Kraig Kinser was five laps away from picking up his first win of the season last week with the World of Outlaws Craftsman® Sprint Car Series at The Dirt Oval at Route 66 in Joliet, Ill., only to have the power steering go bad while leading, the third-generation driver made up for that near-miss on Thursday night, as he was victorious in the Clash at the Creek at Deer Creek Speedway in Minnesota.

“You never want to have issues when you are running up front and tonight we didn’t,” said Kinser. “It was a struggle, because we were so good at the beginning. I knew we weren’t going to be quite as good at the end. Seeing Donny (Schatz) the last five or 10 laps, you have to be at your best. I definitely wasn’t leaving much on the table. There were a few spots I was getting really good bite, but other than that, I was sliding through the turns and just trying to keep momentum up.”

The event, which began on Thursday, June 29 and was postponed by rain three laps into the feature, set up a unique race night, which consisted of hot laps and the remaining 37 laps of the 40-lapper. Kinser asserted himself early in the race as a contender, while David Gravel, the pole sitter paced the first one-third of the race.


“We were pretty good here the other day and had to wait a week, but were close to how good we were last week,” Kinser noted. “This is a high-banked momentum track and if you can get the top working it’s usually better than hitting the bottom. Early, it had some moisture and we could stop, get the car turned and get off the corner. At the end, it was kind of just a momentum deal.”

Kinser lined up fifth when the race resumed on Thursday night and was up to third just a handful of laps into the 40-lap race. He moved into second when Brad Sweet had a flat tire on the 10th lap. Just prior to the halfway point of the race, Kinser used a strong run on the high side of the track to take the lead from David Gravel coming off turn four. Down the stretch, Kinser held off a furious charge by Donny Schatz to claim the win. Kinser endured a number of restarts while out front,

“The restarts were very important, though everything you do with the Outlaws is,” said Kinser.
“To say you beat the 15 car and 2 car and all the guys, everything is important and has to go right.”

Schatz, who re-started the race ninth on Thursday night, steadily worked his way forward. He tried both the high and low side of the track as he tracked down Kinser. Schatz nearly drew even with Kinser a handful of times, often diving under him turns three and four, but never was able to quite make a pass stick.

“Our job is to make something happen,” said Schatz. “I tried to make something happen, but Kraig (Kinser) was pretty good. I knew I didn’t want to get next to him unless I could get by him. He had a little bit left in there. Hats off to those guys. They have been knocking on the door for quite some time and got one done tonight. For us, we normally don’t run that well here, so second is pretty respectable. We were wanting to win and were there fighting for it and that’s all you can ask for.”

Shane Stewart, who lined up eighth for the re-started main event, used a late-race charge to cross the line third to continue his recent hot streak. Stewart was engaged in a spirited battle with Ian Madsen and Sheldon Haudenschild for the third spot for several laps.

“That was a fun race,” Stewart said. “My car seems to get better as the race goes on. On a 40-lap race, that’s what you want. It would have been interesting if there would have been a late-race caution. I’m happy with third. I have to thank all the fans for coming back out and supporting this race. I am looking forward to the rest of the summer.”

Sheldon Haudenschild, who ran as high as third, ended up fourth. The leading contender for the Kevin Gobrecht Rookie of the Year Award, put on a show, as he bounced the right rear off the wall several times, even passing cars in the process.

Brad Sweet recovered from an early race flat tire to round out the top-five, after having to re-start at the tail of the field.

Paul McMahan was sixth, with Greg Wilson seventh, early leader David Gravel was eighth, with Jason Johnson recovering from a trip to the work area to finish ninth. Jacob Allen rounded out the top-10.

The World of Outlaws Craftsman Sprint Car Series returns to action this weekend with the FVP Platinum Battery Showdown at Cedar Lake Speedway in New Richmond, Wisc., on Friday, July 7 and Saturday, July 8.