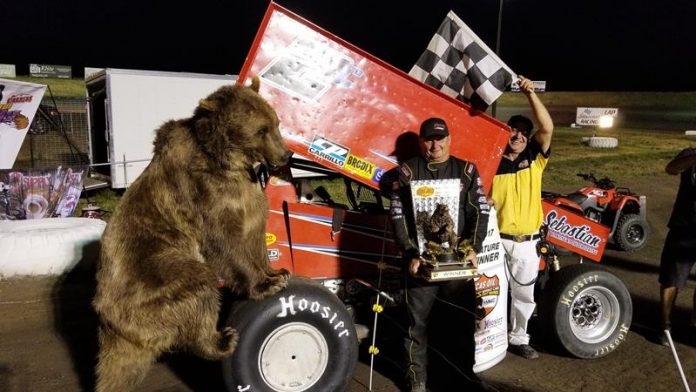 BELGRADE, MT – Figuring out an issue with his car going into the Brownfield Classic, Wayne Johnson’s No. 2c has been stout ever since, and Friday night at Gallatin Speedway, the Oklahoma City native was the class of the field on night one of the second annual Grizzly Nationals; leading non-stop in Friday’s feature event.

“Before that last caution, I felt like the right rear was going down because I started getting real tight through the middle, but my nephew Bud, he motioned to me to just move down and it was alright. After that, they were going to have to be really good to go by me on the outside,” said Johnson who picked up his 49th career Lucas Oil ASCS National Tour feature win.

Johnson’s first trip of the season to Victory Lane with the Lucas Oil American Sprint Car Series National Tour presented by the MAVTV Motorsports Network, the stop on the front stretch was one the wily veteran will not forget, as he got the hang out with the 900lbs Grizzly Bear known as Adam.

“I’m not going to lie, I was nervous about standing next to a Grizzly Bear, but that was really neat,” chuckled Wayne.

Taking the green from the pole of Friday’s 25 lap preliminary feature event, Johnson was stalked from the start by California’s Giovanni Scelzi. Going green from the fourth spot, the driver of the BDS Motorsports No. 1 took the fight for second three-wide to secure the view of Johnson’s Outlaw Wings No. 2c going into the third turn.


Twin grooves through the third and fourth turns in the early laps, the bottom of one and two was the preferred path as the leaders found traffic by the sixth lap. Getting a run to the outside of Johnson off the fourth turn at one point, Scelzi showed a nose but Wayne was able to keep the top spot.

Asked if he was concerned about getting moved on a restart, Johnson replied, “Not at all. All those guys race pretty good. I did see Gio just one time off of four when I slipped up a little bit, and after that I just made up my mind they were going to have to pass me on the outside. I never saw Seth even though he was in the mix.”

Caution working Lap 12, Skylar Gee climbed the left side tires of Bryan Brown while running fourth. Bringing the No. 38b to a stop, Gee rolled on but went to the work area. Skylar would come back to finish 12th.

Green until Lap 18 as Sam Hafertepe, Jr. rolled to a stop with a flat tire, the restart was short lived as debris brought back the attempt, allowing the No. 15h to return to the track and eventually at 11th place finish.

Battling for second on the restart, Seth Bergman found the line under Scelzi as the 15 year old racers slipped up just enough to allow the No. 23 the pass as Johnson motored away before the caution flew once more with five laps to run.

With tire conservation in mind, Johnson was able to take his Hoosiers go the distance with Giovanni Scelzi ending up second as Seth Bergman’s right rear shredded off the final turn. Aaron Reutzel moved by for third with Canada’s Kelly Miller in tow. Keeping his foot in the throttle, Seth was able to salvage a fifth place finish.