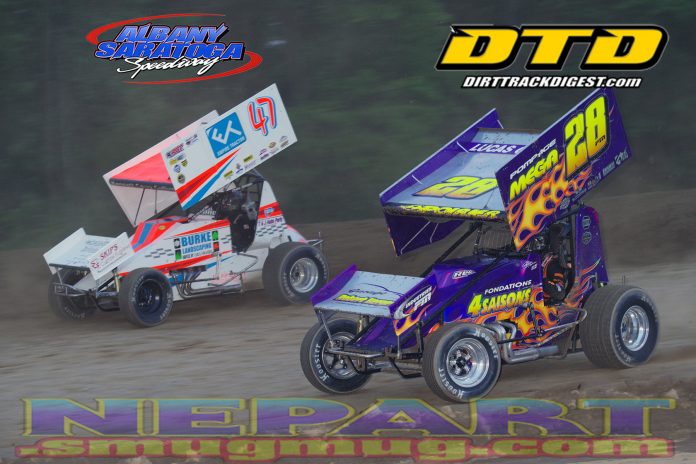 MALTA, NY – Despite racing on a part time schedule in 2017, Quebec’s Steve Poirier has been efficient wherever he takes his 28fm. Poirier started in the sixth position and wasted no time getting to the front inheriting the top spot on lap eight and leading the final 17 laps to score his first PST win of the 2017 season.

It was Danny Varin and Steve Collins pacing the 23-car field to the green, but before a lap was even complete, Jason Barney would spin at the top of turn four creating a parking lot involving Josh Pieniazek, Chad Miller, Josh Azzi, and Derek Jonathan. Nights would be complete for Barney, Pieniazek, and Jonathan.

It would also involve Jared Zimbardi who would end up losing a right rear shock on the car but was able to stumble to the two-minute work area. The two minutes would be complete and Zimbardi was able to return.

The race went back to green with Danny Varin getting a much better restart as would his father, Bobby getting by the 67 of Collins on that restart. Paulie Colagiovanni would then contest for third against Collins and Steve Poirier at the time would complete the top five.

Another yellow was thrown on lap four for a spinning Josh Azzi, he would continue but the event would be complete for Zimbardi due to continuing shock problems.


Danny Varin would begin to build a lead up to over four seconds with laps clicking by, Poirier would eventually get by Colagiovanni, Bobby Varin and Steve Collins to grab second.

Then on lap eight, Varin would slow down on the back stretch due to a right rear flat and it would bring out another caution. Varin would get that tire changed before the two-minute working time was up and return to the tail of the field.

Poirier would inherit the top spot and bring the field back to green where it was now 16-year-old, Paulie Colagiovanni battling for the lead against Poirier. At that time, Davie Franek was also beginning to make his presence known where he would be running seventh prior to the lap eight restart.

As Colagiovanni and Poirier would continue to battle for the lead with Poirier having the advantage, Franek would use multiple lanes to get by other contending cars. He would find himself in the top five before lap 16 when another yellow would be displayed for a spinning James Hanson.

On the ensuing restart, Poirier would begin to build a lead over Colagiovanni who was now trying to hold on for second as Franek was then up to third. On lap 18, Colagiovanni and Franek would make contact in turn three allowing Bobby Varin to get by the two once again for second.

At the checkers, it was Poirier grabbing the win over Davie Franek, Paulie Colagiovanni, Bobby Varin, and Jordan Poirier who was able to get by Steve Collins late in the race.

Franek’s impressive run also earned him the Casey’s Truck Salvage ‘Salvage of the Night’ from going 12th to second. Danny Varin was also able to climb back up through the field and come home 11th earning him the Shuttleworth’s 11th place bonus. Josh Azzi earned the Prestige Pool & Spa Final Finisher award.

Due to a rain delay, the Evingham Site Excavation Dash was pulled from the program, the heats were won by Bill VanInwegen, Danny Varin and Bobby Varin.