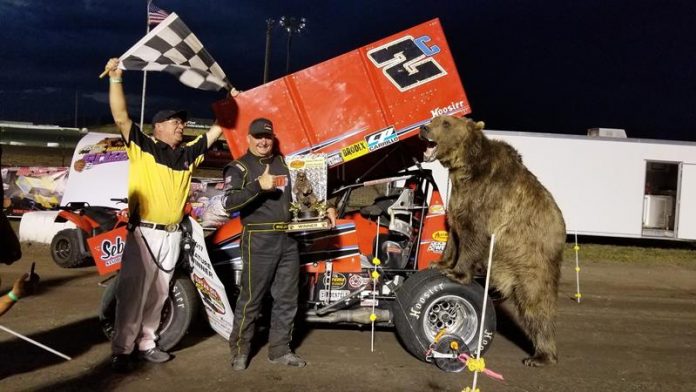 “I can’t begin to tell you how much this team needed this weekend. Ever since we figured out what was wrong with our car, this thing is back to working like it should,” said Johnson of his 50th career National Tour score.

Gridding the lineup fourth, Johnson nearly saw his night end in the first two turns as Kelly Miller shoved up the track. Able to recover and gain momentum, Johnson began picking his way toward the front as Aaron Reutzel and Giovanni Scelzi battled for the lead with the 15 year old of Californian taking the point on Lap 4.

Working past Reutzel on the fifth rotation for second, the caution displayed working Lap 7 for Chauncey Filler who spun to a stop off the fourth turn.

Back to green, Scelzi was in full command as the BDS Motorsports No. 1 pulled the field by a straightaway before hitting traffic at the race’s mid-point. Closing the gap to just a few car lengths, Wayne watched and waited for the chance to make a move.


“Once we got into traffic, I just bided my time and watched to see what Gio was going to do. I knew he was going to be tough to pass,” commented Johnson.

Caught behind the No. 37 of Trever Kirkland going into the third and fourth turn, Scelzi tried to roll the middle as Johnson shot the low side to make the battle three wide with the advantage to Wayne on Lap 17.

Asked about the race with Scelzi for the lead, Johnson replied, “I just have to say, what a hell of a racer. This only being his second night in that car, he did a great job. He just made a little mistake in traffic, and that was the only chance I had. The bottom was better there towards the end and our car was better on the long run, but hats off to my team. They’re doing a heck of a job and like I said, the kid that run second, I think he’s 15 years old, and I’m telling you, his name is going to be in this sport for a long time.”

Able to use slower traffic to keep Scelzi at bay, Johnson crossed under the checkered flag with a 0.771 second advantage. Coming up from ninth, Blake Hahn put his Griffith Truck and Equipment No. 52 on the final podium step. After leading the first three laps, Aaron Reutzel held on to finish fourth with Matt Covington making the top-five.

A field of 33 returned for the second night of the Grizzly Nationals. Four Heats were topped by Blake Hahn, David Hoiness, Johnny Herrera, and Sam Hafertepe, Jr. The night’s B-Main went to Harli White. No provisional starts were used.

Up next of for the Lucas Oil ASCS National Tour presented by the MAVTV Motorsports Network is the Rushmore Rumble at Black Hills Speedway in Rapid City, S.D. on Friday, July 14 and Saturday, July 15.