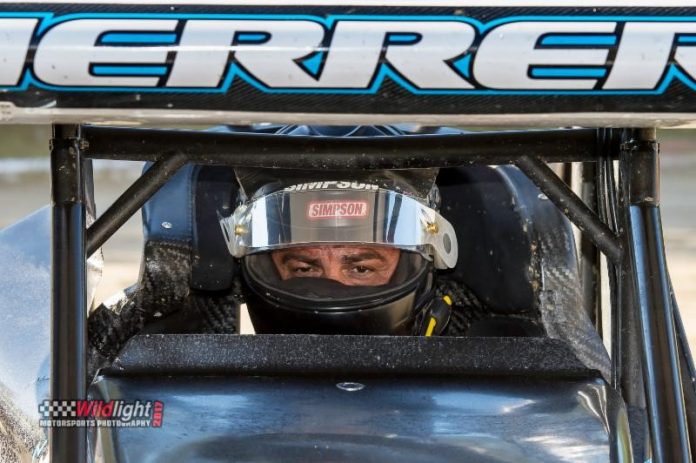 With the series back in town this Friday, July 14 and Saturday, July 15 for the second annual Rushmore Rumble, Herrera looks to keep that win streak going. Currently fourth in series standings in the Mesilla Valley Transportation No. 45x, Herrera has earned 19 wins with the National Tour, with three of those coming in the last two years at Black Hills Speedway.

“It’s a big flat half-mile. We’ve run well as Sedalia, and we raced at Hartford at Michigan and won there too, then with the years at Knoxville so it just seems to fit,” said Herrera.

No stranger to the half-mile oval, Herrera saw competition at Black Hills 1990’s with the World of Outlaws. Looking to keep recent momentum growing as the series heads back into the mid-west, Herrera stated that his season is still going well, but still needs an extra push.

“I still haven’t found the sweep spot on the racecar yet, but we’re still working on it. This year we seem too been good for two or three nights, then we struggle. Even last week, we struggled at Belgrade. I understand with the track it was hard to pass, but I expected better of myself.


Even with that said, Johnny is looking to this weekend a chance to get things rolling once more, “Going into a race track where we’ve won, I’m excited because we have good notes to fall back on so to get a win, or to sweep it again, and get our confidence back up and rolling, would be fantastic.”

With an eye on climbing the National Tour points, the top spot is currently held by Sam Hafertepe, Jr. who holds a 50 point advantage over Aaron Reutzel with Matt Covington trailing in third by 175 markers. While Herrera holds fourth, he is close competition with Wayne Johnson who comes into the weekend off a sweep of the Grizzly Nationals at Gallatin Speedway this past weekend.

Washington’s Seth Bergman is also in the mix with Herrera and Johnson, and like Herrera, has not been able to find a National Tour victory this season. Blake Hahn seventh is chased by Skylar Gee and Harli White.

For continued updates on the American Sprint Car Series, from the National Tour or any of the seven regional tours that make up the over 150 races across the ASCS Nation in 2017, log onto http://www.ascsracing.com