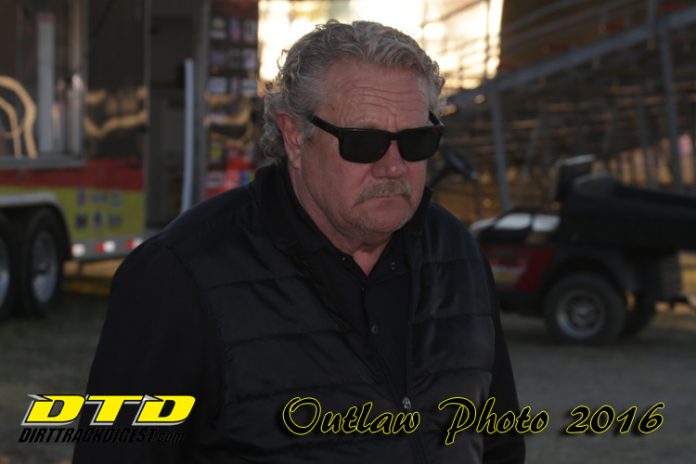 CONCORD, NC – The “King of the Outlaws” got the call from the hall. On June 28, 2017, in front of his family and friends, Steve Kinser was inducted into the Motorsports Hall of Fame of America in Daytona Beach, FL.
Kinser, who had an illustrious career running in the World of Outlaws Sprint Car Series, holds numerous records, including 20 points championships which more than doubles the amount of second-place driver Donny Schatz, who has eight. In addition to his championships, Kinser also visited Victory Lane a record 577 times.
Kinser’s list of accomplishments also includes 12 Knoxville Nationals championships and four Williams Grove National Open championships among many more. The Bloomington, IN native became a household name in motorsports by running and winning with the Outlaws where he was a natural talent.
World of Outlaws Chief Executive Officer, Brian Carter enshrined Kinser into the Motorsports Hall of Fame of America.
“The [Motorsports Hall of Fame of America] typically asks for an important person in the inductee’s career,” said Brian Carter. “The [Motorsports Hall of Fame of America] reached out to Steve and Steve reached out to [World of Outlaws]. It’s just an honor to be recognized by Steve that the World of Outlaws played an important part in his career and we did it all together.”
The Motorsports Hall of Fame of America, originally based in Novi, Michigan from 1989 to 2015, now has a new home in Daytona Beach. With its first induction in 1989, it’s the only hall of fame that encompasses the full spectrum of American motorsports: cars, motorcycles, off-road, powerboats and airplanes.
“It’s impressive to see the list of inductees, and to be included on the list of iconic motorsports figures in the United States and around the world,” added Carter. “When you look at the class of inductees this year, it’s quite an honor to be recognized through Steve [Kinser].”
Kinser is set to be recognized at one of the premier events in Sprint Car racing this weekend, the Kings Royal. Eldora Speedway has asked Kinser to be this year’s Sovereign to crown the winner of the three-day Kings Royal event. Kinser won the Kings Royal seven-times, including the inaugural event in 1984.
“I’m really looking forward to being this year’s Royal Sovereign,” Kinser told Eldora Speedway. “Eldora Speedway has always been one of my favorites and the Kings Royal is the biggest race of the season at the track. It’s also one of two races every driver wants to win every year.
When Saturday’s main event winner pulls into Victory Lane, Ms. Eldora Speedway will greet them to place the winner’s cape around their neck. A second Ms. Eldora Speedway will give the winner a scepter. Finally, the winner will then kneel to the Royal Sovereign, Steve Kinser, to be crowned the new Kings Royal champion.
“After all of my Kings Royal wins, I was so caught up in the moment I don’t know that I really remember what the Sovereign says,” Kinser said. “I’m definitely going to practice before Victory Lane on Saturday night.”
The World of Outlaws Craftsman Sprint Car Series visit to Eldora for the Kings Royal kicks off today, July 13 and runs through Saturday, July 15. Advance reserved tickets are available for purchase for all three nights by visiting  https://eldoraspeedway.ticketforce.com/ or by calling (937) 338-3815.
Can’t make it to Eldora to see whose name will be added to the prestigious list of Kings at this year’s 34th Annual Kings Royal? Find out by tuning into DIRTVision MAX as they cover all three nights next weekend LIVE from Eldora Speedway! Pay-per-view passes are now available for purchase! Visit  DIRTVision.com to subscribe for free.