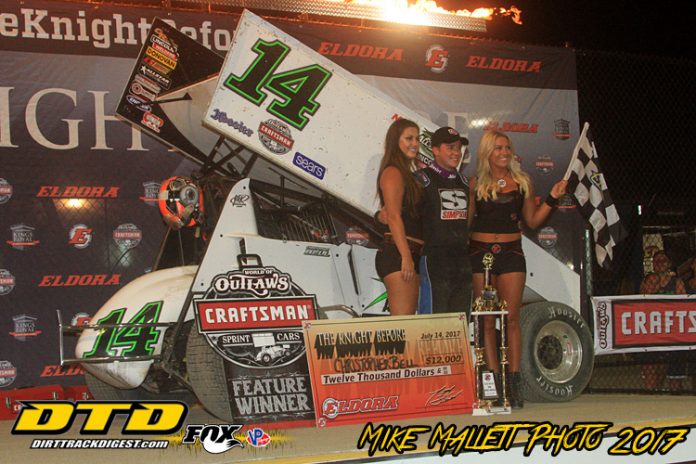 ROSSBURG, OH – Christopher Bell took the lead from Brad Sweet in turn three and then held off a surging Donny Schatz on a restart with nine laps to go to win the Knight Before the Kings Royal at Eldora Speedway on Friday night. Bell, who lined up for the 30-lap main event in third, had to be perfect on the race’s only restart with less than 10 laps to go as the eight-time Outlaw Champion threw everything he had at the 22-year-old Norman, OK native who was driving the No.14 Tony Stewart Racing-Curb/Agajanian entry.

“It’s a dream come true,” Bell said following the victory. “To be able to drive for Tony (Stewart) is a dream come true, to win at Eldora on Kings Royal weekend with the Outlaws, I’m just speechless. I’ve had a lot of good runs here at the Kings Royal. I think I’ve been in the top three the last couple of years whenever I’ve crashed. So, to be able to finally win one was really special. Tonight was only 30 laps and we have 40 of them tomorrow.”

At the drop of the green flag, it was outside pole starter Brad Sweet who jumped out to an early advantage. Behind Sweet, Bell engaged in a thrilling battle with polesitter Brian Brown for the third position in the opening laps.

Sweet’s lead quickly expanded to 1.9 seconds over Bell, but evaporated just as fast when he struggled to navigate through a sea of slower traffic. Bell saw his opportunity on lap 10 and seized it as he drove by Sweet entering turn three and claimed the point.

From there, Bell found himself racing against the cushion, which was nearly against the outside retaining wall, all the way around the racetrack. At the halfway points, his gap was 1.3 seconds over Sweet and Ian Madsen with Schatz running in third.


A few short laps later, Schatz began to make his move forward as he got by Madsen and then Sweet to take second on lap 20.

The only caution of the race came on lap 21 for a stopped Sheldon Haudenschild in turn two and reset the battle upfront with a double-file restart. Bell chose the bottom lane for the restart despite running the high outside groove up to that point.

“The only reason I did it was because I got beat when I started on the top in the heat race,” Bell said. “I watched the heat races and every time the bottom was able to get the jump. I felt like either or would work, but I felt I was more vulnerable if I took the top.”

“I think the caution helped me out big time because I was struggling in lapped traffic,” Bell explained. “I knew I needed to get my wing back and I had just reached for the lever when the yellow came out.

Bell’s choice worked as it put him in the catbird seat to drive to the top lane in turns one and two, but prevented Schatz from attempting a slide job in turns one and two. Schatz poked inside Bell on the bottom in turns three and four and then pulled even for a half lap. Bell maintained his momentum enough in turn two to carry the lead down the backstretch on lap 22 and he dropped to the bottom to take away Schatz’s lane.

“At the time, I didn’t know the bottom was where I needed to be,” Bell said. “I got my wing back and went to the top and was pretty good in one and two. Then, Donny got back beside me off of four and I felt like I hit a pretty good corner, so it was at that point that I knew I needed to change my line in three and four. Luckily I was able to get the momentum again in one and two to drop down in front of him.”

Schatz felt he may have shown Bell the preferred line a little bit early, but also suggested he didn’t have much choice in his bid for the win.

“You just have to go where he’s not and that’s where I was better anyways,” Schatz said. “He stayed up there and we ran side-by-side for a lap there. It forced him to move his lane and maybe I was a little too nice. Maybe I should have bulldozed him in there, but that’s not me.”

Over the final five laps, Bell found some lapped traffic and navigated the chaos with finer precision was able to drive to the checkered flag 0.591 seconds ahead of Schatz’s No.15. The win was a sure confidence boost for Bell entering tomorrow’s $50,000-to-win 34th annual Kings Royal.

“This place is my favorite racetrack in the world,” Bell said. “I’ve had a lot of success here and a lot of hard luck, some of it self-inflicted. I’ve been able to win here in a Midget, a Silver Crown car, a 360 Winged Sprint, and now with the Outlaws, and a Truck too. It’s been really good to me the last couple of years. I’m excited to try and get a big win tomorrow.”

Bell will be looking to use his momentum from Friday’s win to avenge a DNF in last year’s Kings Royal when he flipped against the turn four wall while running second. Despite the strong run in The Knight Before, Bell was cautiously optimistic for Saturday’s main event.

“I felt really, really confident coming in here and then yesterday we just struggled,” said Bell, who failed to qualify for Thursday’s Jokers Wild Feature. “ For some reason, we just didn’t have the speed. They worked really hard and (crew chief) Jimmy Car made some adjustments. I don’t feel like we have enough speed yet to qualify where we need to tomorrow, but obviously we can race okay. Our car is really good when it’s slick. That’s the most important part.”

Sweet maintained the third spot late in the race despite the best efforts of fourth-place finisher Ian Madsen. Brown settled for fifth.

For the second straight night, Brent Marks was the KSE Hard Charger. Marks used a World of Outlaws provisional starting spot to enter the Feature and started 25th. He gained 12 total positions and finished 13th.

The World of Outlaws Craftsman Sprint Car Series returns to action on Saturday night at Eldora Speedway with the $50,000-to-win winner’s share on the line. The event will be broadcast with live pay-per-view video on DIRTvision.com. For more information on the 34th annual Kings Royal, please visit here.

For complete results from the Knight Before the Kings Royal at Eldora Speedway, click here.