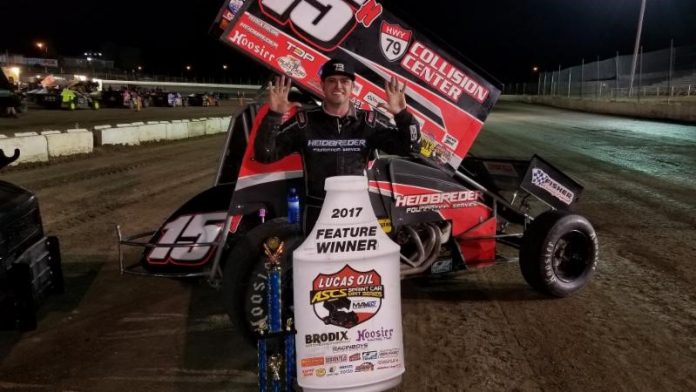 RAPID CITY, SD – Sam Hafertepe, Jr. is the first to double digit wins with the Lucas Oil American Sprint Car Series presented by the MAVTV Motorsports Network in 2017 with his 10th National Tour victory of the year coming at the half-mile Black Hills Speedway to open up the 2nd annual Rushmore Rumble.

“I tell you, we didn’t really prepare for what the track went to. I missed it a little bit, and the rubber actually saved us. If there would have been a bigger cushion like there was in the Heats, we were more prepared for that but even then, there’s no excuses. We got the win. Just had to get that wing back a little bit to straighten her out,” said Hafertepe who picked up his 25th career Lucas Oil ASCS National Tour victory, and first at Black Hills Speedway.

Taking off from the pole of Friday’s feature event, the Heidbreder Foundation No. 15h was not alone as Blake Hahn stalked the National Tour point’s leader. Finding traffic within the first five laps, Hafertepe was able to build a comfortable advantage, but it would quickly vanish as traffic worked wheel to wheel. Allowing Hahn to build momentum, the Griffith Truck and Equipment No. 52 shot to the lead twice though the first and second turns, but would not be able to hold point over Hafertepe.

Working Lap 11, Hahn again looked to set up the No. 15h, but a slower car would nearly end Blake’s night as Hahn’s right rear went skyward over Clint Anderson’s. Able to roll on, the field would end up under red as Lany Reber flipped hard into the fence. All drivers are unharmed.

Bypassing the work area, Hahn restarted to Sam’s back bumper with Hafertepe taking off. Into traffic again in a matter of laps, Hahn closed quickly but mechanical woes would finally strike; sending Blake into the Pits on Lap 16. Avoiding the caution, the runner-up spot fell into the hands of Aaron Reutzel.


Trailing by over three seconds, traffic again came into play as the center line began to form. Having to move out of the rubber to make moves around the back markers, Hafertepe came under fire with two laps to go. With a massive slide job in the third and fourth turn, Aaron took the point. Turning the car down the track, Sam found the grip and with it, held the race lead by inches.

On the pass in traffic, Sam explained, “Just getting through lapped traffic was tough and maybe I was being a little too careful. We have a great car and I didn’t want to mess anything up but when I went in behind the No. 75, I got crossed up and that allowed Aaron to get by, but once we got back to the bottom, Aaron slipped up a little bit and thankfully I was able to get by and hold on to win.”

Trying to work the No. 15h for the last lap pass, traffic put the wrench in Aaron’s plan to win, with the advantage Hafertepe by 1.509 seconds. Aaron Reutzel in second was joined on the podium by Seth Bergman. Earning the FSR Radiator High Point Driver of the Night, Matt Covington grabbed fourth and was the final driver to lock into Saturday’s feature event.

Night one of the second annual Rushmore Rumble saw 27 drivers on hand. Three Heat Races went to Matt Covington, Aaron Reutzel, and Harli White. The BMRS B-Main was topped by Kevin Ingle. One regional provisional was used by Lany Reber.