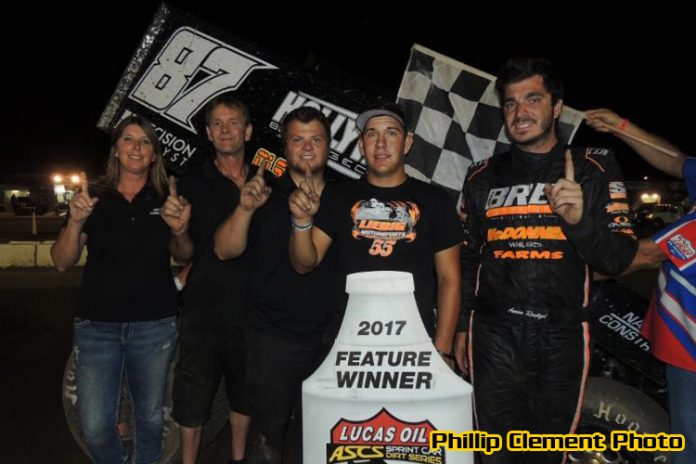 RAPID CITY, SD – Runner-up on Friday night turned to Victory on Saturday night as Aaron Reutzel picked up his fifth win of the season with the Lucas Oil American Sprint Car Series presented by the MAVTV Motorsports Network on Night 2 of the 2017 Rushmore Rumble at Black Hills Speedway.

The win also closed the point’s gap between Aaron Reutzel and leader, Sam Hafertepe, Jr to only 38 markers.

Two attempts at the green following a red for Robert DeHaan, both shots at the start would see Reutzel giving chase to pole sitter, Matt Covington, who had to pedal hard on the cushion to hold off the charge of the Nattress Construction No. 87.

Into traffic, the race for the top spot heated up with the front two trading several slide jobs. Able to turn and burn after every attempt by Aaron for the lead, the point finally went to Reutzel through the first and second turns of Lap 12.


On the pass for the lead, Reutzel stated, “You know, Matt [Covington] took off with the lead but I knew if I could just stay with him until we hit lapped traffic I could get him and he just made that one mistake that allowed me to get by. After that, I feel like I sailed through traffic pretty good. I knew it was going to take someone with a hell of a racecar to outdo me on that one.”

Picking through slower traffic with Covington and Sam Hafertepe, Jr. in tow, all three leaders were nearly sent pit side on Lap 15 as a trio of lapped cars tangled in turn two. With all three headed skyward, the red lights blinked on just as Aaron found a way to thread through the chaos. Somehow, all drivers involved ended up staying upright.

A pair of attempts at the restart as Robbie Price spun in turn one, Aaron pulled away as the race for third moved Johnny Herrera to the show position with Wayne Johnson in tow. On the heels of Matt Covington for second, the race slowed again on Lap 19 for Damon McCune.

Advancing to second on the restart, Herrera was again trailed by Wayne Johnson for third but there was no catching Aaron Reutzel.

Running to second with an engine on its 28th night, Herrera was able to hold off Wayne Johnson with Matt Covington fourth for the second time in as many nights with Blake Hahn rounding out the top-five. Sam Hafertepe, Jr. sixth was followed by Seth Bergman. Moving up from 12th, Harli White was eighth with David Hoiness ninth from 16th. Despite the late race spin, Robbie Price came back to finish 10th.

With 25 drivers on hand, three Heat Races were topped by D.J. Brink, Wayne Johnson, and Blake Hahn. All teams were sent to the A-Feature so no provisional starts were needed.

With a week off for teams to regroup, the Lucas Oil ASCS National Tour presented by the MAVTV Motorsports Network returns to action at Knoxville Raceway on Saturday, July 29. For continued updates on the American Sprint Car Series, from the National Tour to any of the seven regional tours that make up the over 150 races across the ASCS Nation in 2017, log onto http://www.ascsracing.com.

Heat Races (All drivers advance to the A-Feature)