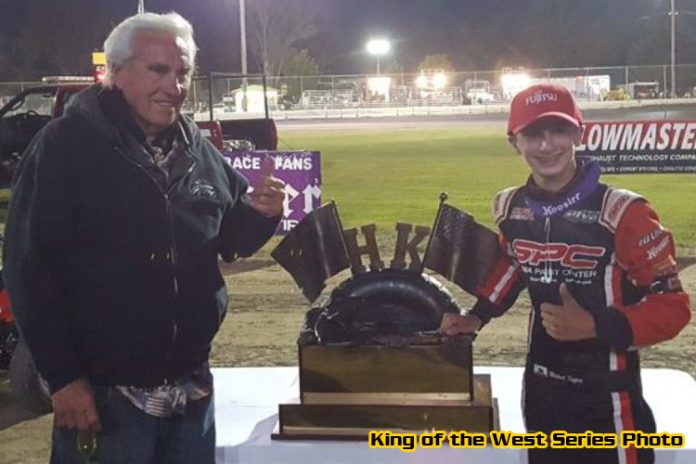 The 15-year old driver pocketed $5,000 for his efforts, a commemorative racing helmet and a permanent spot on the HK Classic perpetual trophy for his nights work. His winning efforts came aboard the potent Dan Simpson/Gary Silva Ranches sprinter and made him the ninth different winner in 12 events this season.

Kofoid spent the first few laps of the event chasing down Hoosier Tires dash winner Cory Eliason, while holding off a tailgating Shane Golobic at the same time. The contest got real interesting when the group roared into slower traffic on the sixth circuit, battling inches apart as they fought for position.

Kofoid finally got around Eliason on the 13th circuit, but the red flag came out a lap later for multiple-time series Brent Kaeding, who got tangled up with another car and flipped in turn four. He was shaken in the accident and went to the hospital after the race as a precautionary measure.


On the restart, Kofoid continued to set a frantic pace, as Eliason and Golobic mixed it up in his shadow using multiple lines on the track.

Fifth starter Justin Sanders entered the fray in the Vontrex Keizer Wheel Maxim and powered past Golobic for third on lap 18. Eliason and Kofoid were inches apart fighting for the lead on lap 20 when they made contact and Eliason crashed into the front straightaway fence exiting turn four. He was done for the night.

On the ensuing restart, Kofoid had his hands full dealing with the multiple challenges of Sanders. At one point, Kofoid made contact and rode down the backstretch wall on two wheels attempting to shake his pursuer.

A final caution came out with six circuits remaining when KWS-NARC point leader Bud Kaeding stopped with a flat left rear tire. This set the stage for one final showdown for the lead. Sanders and Kofoid continued to battle and were side-by-side entering turn three on the white-flag lap, but Kofoid held his line to secure the hard fought victory.

“I knew Justin (Sanders) was fast and was going to make a run at me on the end,” said Kofoid. “However, my team gave me a great car to win tonight.”