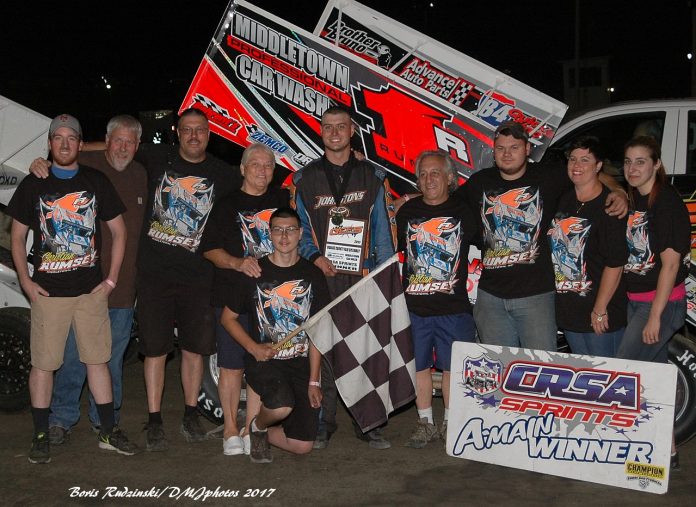 MIDDLETOWN, NY – It was three weeks since the Super Gen Products/Champion Power Equipment CRSA Sprint Tour were last able to compete. The rainy 2017 Summer has truly made its appearance on the original racing schedule for the tour. It forced consecutive cancellations of races at Afton Motorsports Park, Fonda Speedway, and Penn Can Speedway. Finally, one of the nation’s finest tours of 305 sprint car competitors were finally able to roll back into motion at Orange County Fair Speedway Saturday evening.

East Durham New York’s Brett Jaycox and Middletown’s own Christian Rumsey brought the nineteen car field down to the green flag for the start of the twenty lap main event. Jaycox’s 07 Outlaw Motorsports ride and Rumsey’s 1R Middletown Carwash entry powered down the front straightaway in a nearly dead-even drag race into turn one. Rumsey maintained a line just to the outside of Jaycox and gained enough momentum to roll past Jaycox and take command of the early lead.

The race was slowed near the halfway point for a spinning and stalling car of West Milford New Jersey’s Scott Flamer. It proved to be one of the tense moments of the evening. Flamer’s Wayne Subaru number 1F car was facing the outside wall in turn two as it completely blocked the preferred racing line. Luckily oncoming cars were able to miss Flamer as the caution lights and flags were displayed. Once the incident was cleared Rumsey brought the field back to the green flag for another run as the race leader.

The feature event would develop more trouble with six laps left in the A-Main. Nazareth Pennsylvania’s Chad Conor spun his car before exiting turn four and backed his 301 Bangor Steel machine into the outside retaining wall. The damage sustained in the crash was severe enough to end Chad’s evening.

The final restart came with six laps remaining in the A-Main. Brett Jaycox was able to reel in Rumsey at different stages of the event. But none of his efforts were good enough to be able to make a move to pass the leader. Christian Rumsey led every lap of the CRSA Sprint Tour Feature to score his first ever CRSA Sprint Tour feature win.


“Before I start I just want to dedicate this win to my Grandfather who passed away a few years ago and my Uncle who is struggling with cancer right now. We ran a really good race. The car was hooked up. I want to thank my Dad, Ryan, Kevin, all of the guys that help us out week in and week out. Everything they do is just amazing.”

Rumsey explained what he had to do to maintain the lead for the entire event at Orange County Fair Speedway.

Brett Jaycox ran into mechanical trouble during the final lap of the race. He lost power to his 07 car and lost almost all positions in the event. This allowed Dan Hennessy and Tyler Jashembowski to move up to the second and third finishing positions. Hennessy was able to talk during podium interviews at the end of the evening.

“It’s our home track. But we have been struggling a lot this year. A second place is pretty much like a feature win for us. I have to thank Chuck Alessi of course. I have to thank our sponsors, Landworx and Vesica Vodka. I also would like to thank my son for coming along tonight.”

Tyler Jashembowski finished third and also had a double duty evening in his modified and sprint car.

The CRSA Sprint Tour’s next event will be at the Afton Motorsports Park in Afton, New York on Friday, August 4th. This will also be another round of the season-long Algonkin Challenge Series at this speedway. Fans and teams can find more information by going to crsasprintcars.com.