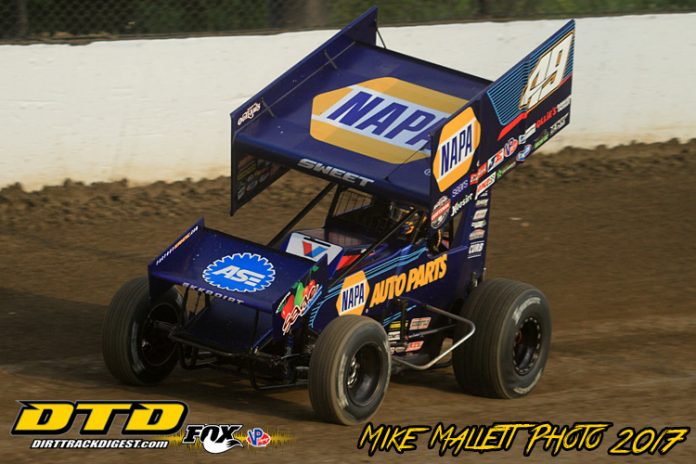 KANSAS CITY, KA – Tickets are now on sale for the FVP Platinum Battery Shootout, featuring the World of Outlaws Craftsman Sprint Car Series event at Lakeside Speedway in Kansas City, Kansas on Friday, October 20 and can be purchased online at slspromotions.ticketforce.com or by calling SLS Promotions at 815-344-2023. The event is being run in conjunction with the NASCAR weekend at Kansas Speedway, which is less than 10 miles from Lakeside Speedway.

Brad Sweet scored a thrilling win at Lakeside last season over his Kasey Kahne Racing teammate Daryn Pittman. Joey Saldana led early in the race, before Sweet took the top spot, using a strong restart, following a caution. Pittman is a past winner at Lakeside, as is eight-time and defending series champion Donny Schatz.

Battling Sweet, Pittman and Schatz in 2017 is a talented group of full-time competitors, including David Gravel, who is third in points and already has a career-high 10 wins this season. Shane Stewart who has four win, is fourth in the current standings. Pittman, who is a past winner at Lakeside, currently rides fifth in points. Jason Johnson, the winner of the 2016 Knoxville Nationals has a couple of victories thus far in 2017 and is sixth in points.

Sheldon Haudenschild, the leading contender for the Kevin Gobrecht Rookie of the Year Award, currently sits seventh in points, followed by veteran driver Kraig Kinser, who recently picked up his first win of the season, in eighth, Logan Schuchart, who has three wins, is ninth and Jason Sides rounds out the top-10.


Tickets for the FVP Platinum Battery Shootout, featuring the World of Outlaws Craftsman Sprint Car Series at Lakeside Speedway on Friday, October 20 can be purchased online at http://slspromotions.ticketforce.com or by calling 815-344-2023.