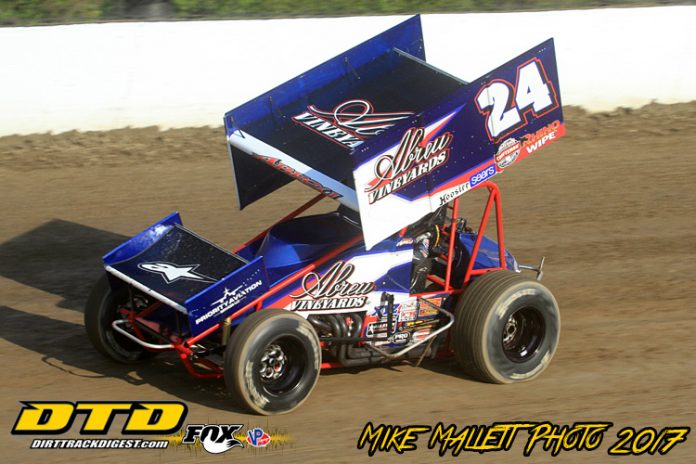 CONCORD, NC – Drivers and teams look to be the strongest of them all when the Ironman 55 is all said and done. A two-night event on Friday and Saturday, August 4 and 5 at Federated Auto Parts Raceway at I-55 in Pevely, Missouri is the longest Feature event of the year on the 90-plus events schedule for the World of Outlaws Craftsman® Sprint Car Series.
Although the Series has been running at the tough bullring since 1987, it was in 2009 that a new challenge at the Pevely, MO track was born: a 55-lap feature event called the Ironman 55, a race that is longer in distance than all other Sprint car races on the schedule.
“It’s a long race for a Sprint car,” said Rico Abreu, who won last year’s Ironman 55. “I’m looking forward to it. I was really fast [at I-55] last year. The thing is, you have to put yourself in position to win the Ironman, starting up front and saving your stuff until the last ten laps. It’s so difficult to win these Outlaw races in the last ten laps; that’s what makes it really crucial to start up front.”
The third-mile oval is one of the highest-banked tracks on the circuits. With cars turning laps in the 10-second bracket, and the extended Feature laps, it’s no wonder it’s one of the most physically challenging tracks on the circuit.
“It’s bullring racing, so you’re always on the go, you’re never slowing down, your heartrate is always up, so I just work on my breathing and staying focused the entire race,” added Abreu. “It’s easy getting caught up racing other cars, and we catch traffic and don’t know what direction to go.”
In addition to the extra laps on Saturday’s Feature, the event carries the “Month of Money” into early-August, with an $8,000-to-win Night before the Ironman on Friday and $20,000-to-win Ironman 55 on Saturday’sfinale. It sure would be a nice little padding in the pocket as teams head into Knoxville for the 5-Hour Energy Knoxville Nationals the following week.
Larson Marks Racing driver Shane Stewart knows what it’s like winning at Federated Auto Parts Raceway at I-55. Stewart lifted the dumbbell trophy in Victory Lane in 2015.
“It’s a fun race. It’s one of those races that’s in the ‘Month of Money’ and pay well,” said Shane Stewart. “Being a previous winner of that race, once you get that feeling you want to get that feeling again.
One of the special features of the weekend is the fan interaction with the drivers. Just prior to SaturdayNight’s Feature event, all 24 Feature drivers take a walking parade lap for driver intros around the third-mile oval, stopping and signing autographs along the way.
“The atmosphere is really cool how they do the driver introductions,” added Stewart. “I kind of wish we could do more of that at some of our biggest shows.”
Who will be the strongest in 2017? Join us for a great weekend of racing to find out. For tickets visit WoOSprint.com/Tickets or call 844-DIRT-TIX.