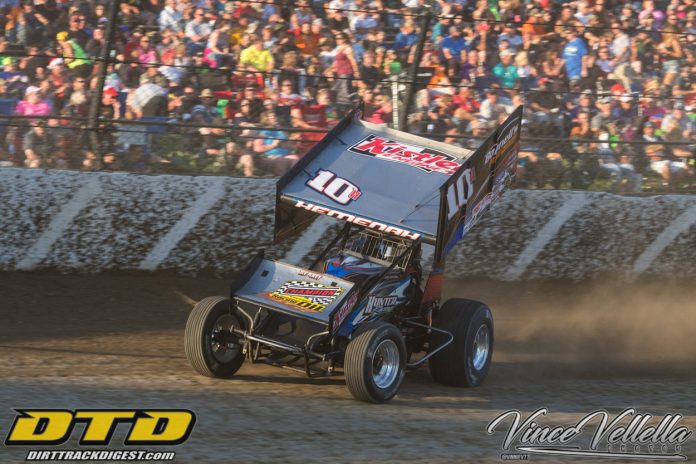 INDIANAPOLIS, IN – After a weekend break to allow teams the opportunity to compete in the 34th Annual Kings Royal at Eldora (OH) Speedway, the Arctic Cat All Star Circuit of Champions will return to competition beginning Friday evening, July 21, with the second edition of the I-79 Summer Shootout in Western Pennsylvania. The three-race swing will feature Arctic Cat All Star action at three different facilities over the course of three straight days, each awarding a $5,000 top prize, as well as full points toward the 2017 Arctic Cat All Star championship.

A weather interruption in 2016 only allowed for two of the three programs to be completed; Dale Blaney secured high honors at Eriez Speedway, with Kraig Kinser earning the victory at Tri-City Raceway Park. The visit to Pittsburgh’s Pennsylvania Motor Speedway would lose to Mother Nature before preliminary action could be completed.

Joining a competitive group of Western Pennsylvania regulars, as well as a talented roster of outside invaders, the Arctic Cat All Star Circuit of Champions will be led by current Series point leader, as well as five-time and defending Series champion, Chad Kemenah. The pilot of the Hunter Racing/DKW Transport/JRC Transportation/Seneca Energy/No. 10H owns a 282 point lead in the current championship hunt, earning three victories thus far in 2017, most recently during competition at 34 Raceway in Burlington, Iowa.

Eriez Speedway will open pit gates at 12-noon on Friday, July 21. A mandatory drivers meeting will be held at 6:00pm, followed by hot laps at 7:00pm. More news and information can be found live on the Web at www.eriez-speedway.com.

Pittsburgh’s Pennsylvania Motor Speedway will open pit gates at 12-noon on Saturday, July 22. A mandatory drivers meeting will be conducted at 5:30pm, with hot laps to follow at 6:00pm. Fans can find information pertaining to ticket sales and reserved seating online at www.ppms.com.

Tri-City Raceway Park will allow teams to pull into the pit area upon arrival on Sunday, July 23. The mandatory drivers meeting will take shape at 5:00pm; hot laps will follow at 5:30pm. Additional information can be found online at www.tricityracewaypark.com.