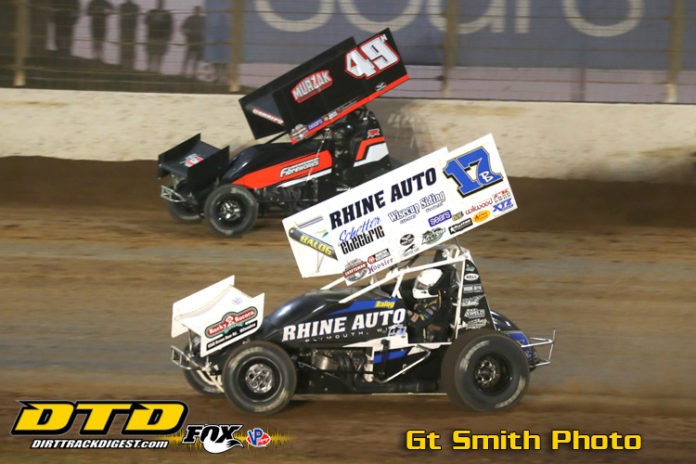 WILMOT, WI – The Badger 40 for the World of Outlaws Craftsman Sprint Car Series is coming up this weekend on Saturday, July 29 at Wilmot Raceway in Wisconsin. This year’s event will mark the fifth visit by the series to the track located at the Kenosha County Fairgrounds near the Wisconsin/Illinois border. David Gravel has won each of the last two World of Outlaws Craftsman Sprint Car Series races at Wilmot and is the only driver who has multiple victories with the series at the track. A strong contingent of local and regional drivers will look to defend their home turf against the Outlaws. This edition of The Breakdown sets the stage for the Badger 40 at Wilmot Raceway.

The track
Wilmot Raceway is a semi-banked, one-third mile. The track record of 12.609-seconds was established by Bill Balog on May 26, 2012.

Past winners
David Gravel is the defending race winner of the Badger 40. The Connecticut native was victorious over eight-time and defending series champion Donny Schatz. Gravel also was won at Wilmot Raceway in 2014, which makes him undefeated in his pair of starts with the World of Outlaws Craftsman Sprint Car Series at the track.

Mark Dobmeier won the inaugural World of Outlaws Craftsman Sprint Car Series event at the track in 2006, while filling in for Brooke Tatnell. That race was a thriller as Dobmeier, Daryn Pittman and Jeremy Campbell all battled for the win on the last lap.

Pittman made up for his near miss in 2006, by winning at Wilmot Raceway in 2008. The 2013 Outlaws champion led the race early, before Chad Kemenah took the top spot. Pittman moved back to the point just past the halfway point and would stay out front to earn his first Wilmot win.

Veteran presence
Donny Schatz has four top-10 finishes in the same number of starts at Wilmot Raceway in his career. The track is one of the few on the circuit that he has not won at. Jason Sides and Paul McMahan have each competed in three Outlaws race at Wilmot. Brad Sweet has finished fourth in both of his prior trips to the track.

Shane Stewart also has made two starts at Wilmot, earning a top-10 last year. Greg Wilson, the defending Kevin Gobrecht Rookie of the Year Award winner, recorded a top-10 finish last year at Wilmot Raceway in his second Outlaws starts at the track.

Return visit
Jason Johnson finished seventh last season in his debut at Wilmot Raceway. The reigning Knoxville Nationals winner has a pair of wins this season and is just outside of the top-five in points. Clyde Knipp will also be making his second visit to Wilmot.

The next generation
The Shark Racing team of Logan Schuchart and Jacob Allen are on the road again this season. Schuchart picked up a top-10 finish last season at Wilmot. Allen started third in the Badger 40 last year and was running among the top-three in the early-going, before a spin relegated him to the rear of the field. Allen charged back through the pack to finish 12th. Schuchart has three wins this season and is among the top-10 in the series standings.

Rookie contenders
Brent Marks and Sheldon Haudenschild are both contending for the Kevin Gobrecht Rookie of the Year Award this season. Haudenschild finished second at Wilmot Raceway last year in an event co-sanctioned by the Arctic Cat All Star Circuit of Champions and Bumper to Bumper Interstate Racing Association (IRA). Marks, who hails from Myerstown, Penn., will be seeing Wilmot for the first time.

Invaders
A strong contingent of drivers who compete with the Bumper to Bumper Interstate Racing Association (IRA) are expected as well, including Bill Balog, who won his first World of Outlaws Craftsman Sprint Car Series race last year in the state of Wisconsin at Beaver Dam Raceway. Other front-running IRA drivers expected include Scott Thiel, defending series champion Jeremy Schultz, Kyle Marten, Steve Meyer and Matt Vandervere among others. Balog, Thiel and Vandervere have all won IRA races at Wilmot thus far in 2017.

Another of the “invaders” expected for the “Badger 40” is Brady Bacon. Bacon is in the midst of his first season driving for the Bacon-Marshall Racing team, which he co-owns with Richard Marshall. The Oklahoma native, who now calls Winchester, Indiana home, is the reigning Amsoil USAC National Sprint Car Series champion.

Hunter Schuerenberg is also expected to make the trip north to Hartford Speedway. The versatile driver has been running a combination of winged and non-wing sprint car races this season. Schuerenberg picked up an Amsoil USAC National Sprint Car Series win in Florida back in February.

Tickets for the Badger 40, featuring the World of Outlaws Craftsman Sprint Car Series at Wilmot Raceway in Wilmot, Wisconsin on Saturday, July 29 and can be purchased online at slspromotions.ticketforce.com or by calling SLS Promotions at 815-344-2023 and at the track on race day.