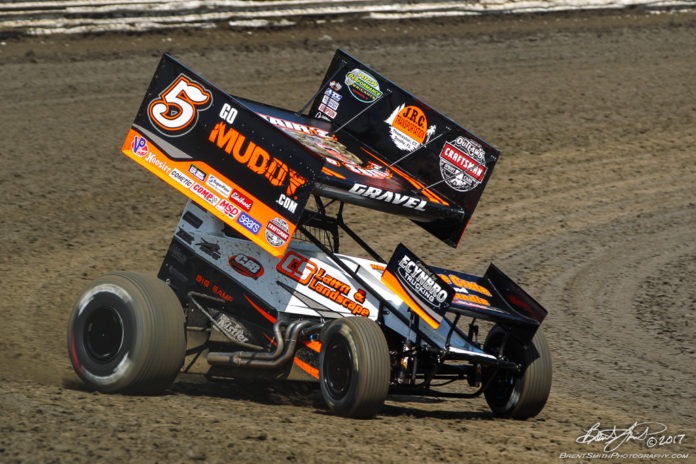 HARTFORD, MI – Patience was certainly a must on Friday night in the Battle of Michigan for the World of Outlaws Craftsman® Sprint Car Series. David Gravel showed the patience of a true veteran, enduring five cautions and one red flag period en route to winning at the re-configured Hartford Speedway.

Gravel, who started third, was able to get by Brad Sweet in lapped traffic with just three laps remaining, after erasing a sizeable lead that Sweet had as the laps wound down in the 30-lapper. For Gravel, it was his 11th win of the season for the CJB Motorsports team. He credited the changes his team made during a lap-17 open red flag to helping him reach victory lane.

“I think it was better running second,” said Gravel. “It was a lot of fun. We raced real hard, even with how slick it was. It was very technical out there. We had the red flag and I think we made the car better during it. We were really tight, but you needed to be on a slick track like this. Thanks to my guys for busting their butts and I’m happy we could get another one.”

Brad Sweet jumped out to the lead on the start, after lining up on the outside of the front row. He paced the field for the first eight laps, with Gravel taking the lead on the top side of turn two. Sweet returned to the point on a lap-11 restart using the high groove. Gravel ran side-by-side with Sweet through three and four with four laps to go and took the top spot on the very next lap.


“When I was second, I had a really good restart and got the lead,” explained Gravel. “Then when I was leading, I lost the lead on a restart, so they went both ways tonight. It was tough to get going on the starts. You kind of had to ease on the throttle on the straightaway to get into turn one.”

Sweet, who led 25 total laps in the 30-lapper, finished second to earn his 40th top-five finish of the season, which is tied for the series lead in that category with eight-time and defending series champion Donny Schatz.

“I got a little free at the end and just didn’t cover the lines well enough in traffic,” said Sweet. “I got to the first lapped car and we just weren’t good enough to pass him. If I could have moved around, I think I could have held David (Gravel) off. It just got super technical and line-sensitive. I just made too many mistakes and gave the race away late. We’ll keep fighting and hopefully we can get this NAPA Auto Parts car to victory lane where it belongs. The car is good enough to win, we just need to make it happen.”

Logan Schuchart followed up a win earlier this week at Ohsweken Speedway in Canada with a third-place finish. The Pennsylvania native battled for a large portion of the race with Gravel, while the eventual winner was running second. Since debuting a new car, the driver of the No. 1S for Shark Racing hasn’t finished off the podium.

“We wanted a better car about a month ago,” said Schuchart. “The one we were running was worn out. This one is brand new and has a first and a third. I can’t say enough about the guys who put this car on the race track. It was a fast race car when we got it and its rolling good. This is a good time of the year to be rolling good and be fast. We just have to keep it up and make the right changes at the right times.”

Brent Marks, one of the contenders for the Kevin Gobrecht Rookie of the Year Award, finished a season-best fourth at Hartford Speedway. For the Pennsylvania native, it was his first top-five finish of the season.

Kraig Kinser crossed the line fifth, with Donny Schatz sixth. Daryn Pittman recovered from a trip to the work area on the 11th lap to weave his way back through the field to finish seventh. Sheldon Haudenschild was eighth with fellow Ohioan Greg Wilson ninth. Wilson was the KSE Hard Charger, after taking a provisional to start 25th. Shane Stewart rounded out the top-10.

The World of Outlaws Craftsman Sprint Car Series returns to action on Saturday, July 29 at Wilmot Raceway in Wisconsin for the running of the Badger 40.