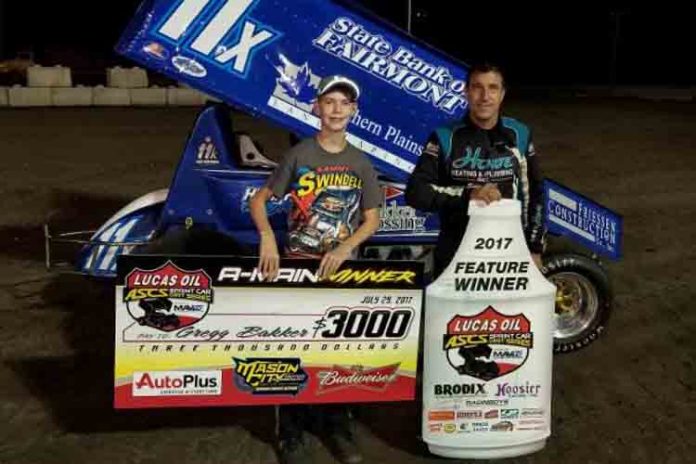 “Getting to start in front like that with the track the way it was helps. This is Stock Car country and that kind of track is what they like,” said Bakker who became the 138th driver to win a Lucas Oil ASCS National Tour event, Gregg Bakker is also the second first time winner on the 2017 season; joining Jake Bubak who topped the series at West Texas Raceway on June 9.

Testing the top of the track before the drop of the green, Bakker never ventured up the banking again once the race began.

“I was watching the track earlier and the Street Stocks and Modifieds started moving to the top and I thought that might come in so on my warm up lap, I went to the top and thought this isn’t the place to be, but when you get into traffic, you don’t know how much the guys behind you are moving around and if the rubber is getting wider to where they can sneak by.”

Leading start to finish, the win was not an easy one for the Bakker Crossing No. 11x as Matt Covington was all but glued to his back bumper as the pair rolled the bottom of the half-mile oval. Working to traffic at the race’s mid-point, Gregg dare not miss a mark as Covington was joined by Sam Hafertepe, Jr. and Wayne Johnson with all three looking for a chance to roll by.


Finally clearing the slower car of Chris Masters with less than five laps to run, Bakker quickly put distance over the No. 95. With victory coming into view, the race’s lone caution flew as the field raced to the white flag for Carson McCarl who spun in the fourth turn.

Back to the last fully completed lap for the restart, Bakker was able to keep Matt Covington at bay as the field raced to the final lap. Racing off the final turn for the win, things behind the State Bank of Fairmont No. 11x got dicey as Matt Covington’s engine let go rolling into the third turn.

With Sam Hafertepe, Jr. and Wayne Johnson bearing down on the T&L Foundry No. 95, both drivers were on the binders to keep from ending up in a smoldering pile. Able to shoot under Matt off the final turn, Hafertepe rolled across the line second with Johnson third.

Taking his struggling mount all the way to the checkered flag, Matt Covington was edged out at the line for fourth by Johnny Herrera by a few feet. Josh Baughman sixth was chased by Thomas Kennedy with Blake Hahn in tow. Iowa’s Chris Martin was ninth with Aaron Reutzel moving up six spots to tenth.

Up next for the Lucas Oil ASCS presented by the MAVTV Motorsports Network is the 27th annual 360 Nationals presented by Great Southern Bank at Knoxville Raceway in Knoxville, Iowa. Events kick off on Thursday, August 3 and run through Saturday, August 5.

Heat Races (All Drivers advance to the A-Feature)