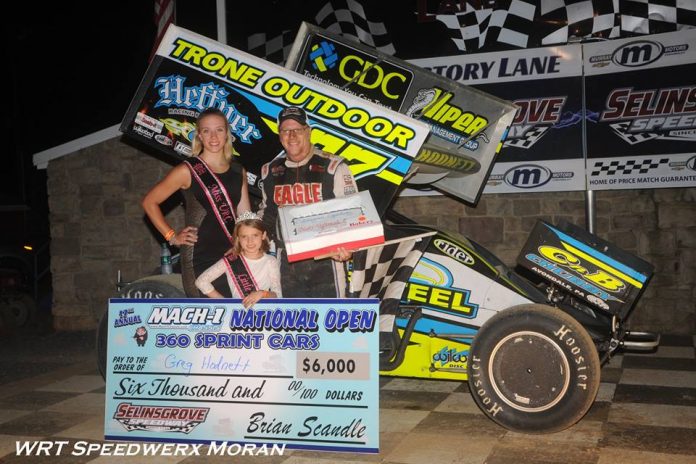 SELINSGROVE, PA – Greg Hodnett added his name to a prominent list of winners of the Mach 1 Chassis National Open for 360 sprint cars Sunday night at Selinsgrove Speedway. Hodnett drew the number one to start from the pole of the 30 lap Sprint Car spectacular.

Hodnett bolted into the race lead and left prelim night winner Mark Smith to battle with Jason Shultz for the runner up spot. Blane Heimbach came from his sixth starting spot to work by Shultz for third and then soon by Smith by the second spot.

By lap 14 Smith and Heimbach’s battle for second had closed in on Hodnett in lap traffic. A red flag for Nate Snyder stopped the race and gave Hodnett the open race track once again.

On the restart Heimbach was able to pull away from Smith and focus on the race leader. Hodnett’s lead began to shrink again when he caught the tail of the field on lap 24. By that time Curt Michael had climbed into the top five as well.

The yellow flag again unfurled on lap 25 ending the race for the lead. Heimbach’s number 12 had stopped on the home stretch ending his bid for the National Open crown.


With five to go Mark Smith would need to make his move quick on the restart. Smith kept the pace of the race leader for the next lap before Hodnett again extended the advantage. Michael was now by Shultz and on Smith’s tail for second.

Hodnett closed out the final laps of the 17th annual running of the National Open to take the $6,000 payday.

Smith was second followed on the podium by Michael.

Jeff Stere presented a hard charger award that went to Layton who came from 20th to finish in ninth.

Dave Grube was in a race long battle with Cale Reigle during the 305 Sprint Car main event. Reigle took over the top spot from Grube on lap eight. Grube then entered into a tight battle with Tyler Resser for the second spot. Resser was able to grab the spot before Grube took it back.

The battle for second proved that much more important when the rear axel broke on Reigel’s number 99 on lap 14. It was the first and only caution flag of the race.

On the restart Grube had pressure right away from Reeser. Reeser continued to try to use the momentum of the outside line for the remaining laps to take the race lead away. Grube on the other hand stayed loyal to the inside line.

Although Reeser got very close on the last two laps, he was never able to pass Grube. Grube’s checkered flag was his first at the speedway.

The Econo Late Model inversion was a four for the feature event. Tim Krape picked the inversion and put himself fourth to start the feature in what he called a dismal year of racing. He thought maybe the pill draw was going to just be another part of his bad luck season.

Tim Fedder had a similar idea after taking the race lead from Troy Miller on the opening lap. Fedder continued to lead while Krape worked his way to second.

Krape would close on the race leader and then fall off again over the next 13 laps. When the two to go sign was given Fedder had begun to race in lap traffic.

Fedder tried to be a little more conservative around the slower cars and that allowed Krape to muscle the race lead away on the final lap going down the back stretch. There was not enough time for Fedder to recover and take the race lead back.

Krape lead only one lap of the main event but it was the most important one. Fedder was second followed across the line by Todd Snook, JR Toner, and Shaun Miller.

This coming Saturday, Aug. 5, the Selinsgrove Speedway kicks off the final full month of racing this season with the Sunbury Eagles Club Night and the Eastern Museum of Motor Racing on-hand for the rescheduled Firecracker 30 for the 360 Sprint Cars plus Super Late Models, Pro Stocks, and Econo Late Models. Racing at 7:30.