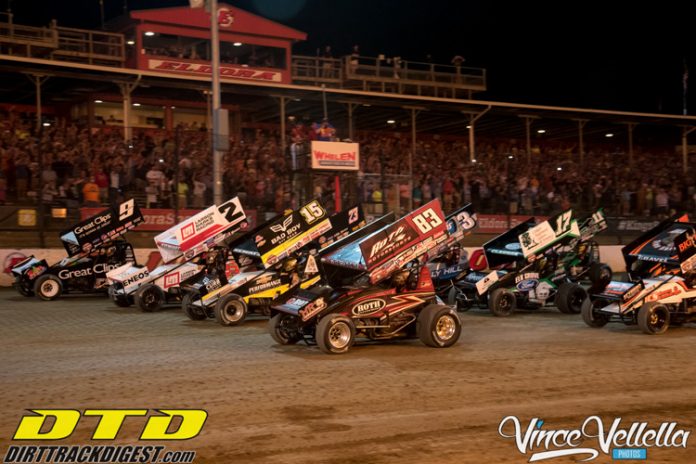 MINOT, ND – The World of Outlaws Craftsman Sprint Car Series is heading to North Dakota, August 18-20 for a triple-header weekend of racing. Leading the way will be North Dakota native, Donny Schatz, the eight-time and defending series champion.

The action kicks off on Friday, August 18 at River Cities Speedway in Grand Forks as American Tire Service Presents the 2nd Leg of the Northern Tour. David Gravel was victorious for the first time in his career at River Cities Speedway back in June. Schatz is the winningest driver with the series at the high-banked bullring, having picked up eight wins at the track, dating back to 2008.

Prior to the event at River Cities Speedway, American Tire Service will host a Meet & Greet, with a Ticket Giveaway on Race Day, Friday, August 18, from 12-2 p.m. at their location on Gateway Drive, across from the track, featuring Greg Wilson, driver of the Hercules Tires No. w20 car.

The tripleheader weekend wraps up on Sunday, August 20 at Nodak Speedway in Minot, with the running of the Gerdau Recycling Magic City Showdown Presented by Schatz Crossroads Truck Stop and Fastlane Car Wash. Schatz has won five consecutive Outlaws races at his home track. Pittman is also a past winner at the three-eighths-mile, which is located at the North Dakota State Fairgrounds.


Tickets for all three events can be purchased online at https://slspromotions.ticketforce.com or by phone at 815-344-2023.

For the events at Red River Valley Speedway and Nodak Speedway, discount general admission are available for purchase at participating NAPA Auto Parts stores. Each General Admission ticket purchased at a NAPA Auto Parts location will feature a special $5 discount. Tickets buyers will exchange their NAPA receipt for tickets at the Main Grandstand ticket booth on race day.