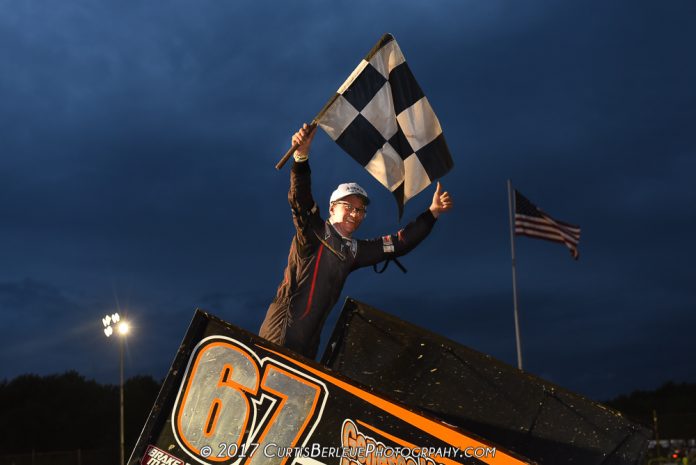 BUSTI, NY – After losing the lead two weeks ago at Woodhull Raceway due to lap traffic, Steve Collins redeemed himself Saturday night at the Stateline Speedway by taking his second Patriot Sprint Tour win of the season.

The field was brought to green by Jordan Thomas and Jared Zimbardi with Thomas taking command early. The first yellow was brought out on lap four due to a spinning Josh Azzi on the bottom of turn three.

That would be the only caution in the 25-lap event as Thomas would bring the field back to green. Zimbardi would continue to pressure the young driver, and finally on lap eight, Zimbardi would take the race lead from Thomas.

Two laps later, Collins was also able to power around the 79 of Thomas and the two drivers atop the PST American Series point standings would battle for the race lead. For the next three laps, Steve Collins would attempt many different racing lines to get around Zimbardi but nothing would work.

Then on lap 12, Zimbardi made contact with a lap car allowing Collins to get by as they entered turns three and four. Collins would officially be scored as the race leader on lap 13.


It was then Zimbardi’s turn to try many different race lines to get around Collins but he would not find any success. Meanwhile, the battle for third began to heat up between Jordan Thomas, Kyle Drum and Steven Hutchinson Jr. with Thomas barely holding on.

Lap 19 would find Zimbardi all over Collins once again for the race lead but it was not easy in the final laps. On lap 23, lap traffic would come into play once again as Collins would make minimal contact with a slower car but was able to maintain momentum heading into the corners.

Collins would take the famous quadruple checker flags from Stateline’s Spanky Hall and take his second win of the 2017 season. Zimbardi would have to settle for second followed by Jordan Thomas, Kyle Drum and Steven Hutchinson Jr completing the top five.

The tour will take the weekend off before visiting Penn Cann Speedway on Friday, August 18 and for the first time ever, the tour visits Orange County Speedway on Saturday, August 19. It is the first of many PST/URC challenge event weekends in 2017.