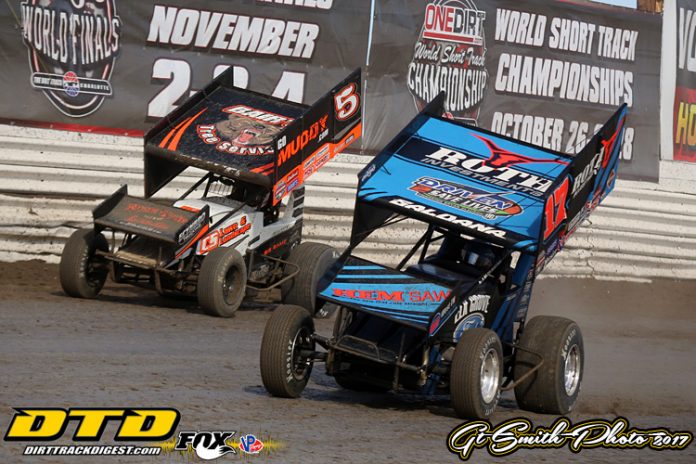 GRAND FORKS, ND – The 2nd Leg of the Northern Tour Presented by American Tire Service Inc. for the World of Outlaws Craftsman Sprint Car Series at River Cities Speedway in Grand Forks, N.D., is just around the corner on Friday, August 18. Earlier this season, David Gravel was victorious at the high-banked bullring for the first time in his career with the Outlaws.

Gravel inherited the lead on the fifth lap, when pole sitter and early leader Jacob Allen got into the wall and upside down off turn four. Gravel would trade the top spot with Kerry Madsen twice in the middle stages of the race en route to taking the win in the 40-lapper. Madsen ended up second, with North Dakota native Donny Schatz in third, Brad Sweet fourth and Joey Saldana fifth.

Last year, Schatz swept both legs of the Northern Tour at River Cities Speedway. In June of 2016, he took the lead from Logan Schuchart on lap-21 and would stay out front for the remainder of the 40-lap contest. In August of 2016, Schatz started on the pole and led all 40 laps to become the first driver ever to lead flag-to-flag in a World of Outlaws Craftsman Sprint Car Series race at River Cities Speedway. Schatz is the winningest driver with the series at the track with eight victories, including in five of the last seven races.

Daryn Pittman, the 2013 World of Outlaws Craftsman Sprint Car Series champion, has won once at River Cities Speedway, with that victory coming in 2014. Pittman recently picked up his first win of the season at Federated Auto Parts Raceway at I-55 in Missouri, which is a high-banked bullring, similar to River Cities Speedway.

Leading the way into River Cities Speedway again this year is Schatz, who has 15 wins this season and holds the series point lead. Brad Sweet is currently second in the standings and has won four races this season. Sweet leads the series in top-10 finishes. Gravel is currently third in the standings on the strength of 12 wins. The 25-year-old is also near the top of the leaderboard in top-10 and top-five finishes.


Pittman is currently fourth in points, with Shane Stewart just behind him in fifth. Jason Johnson is sixth in the standings, followed by rookie Sheldon Haudenschild in seventh, Kraig Kinser in eighth, Schuchart in ninth and Jason Sides in 10th.

Paul McMahan, who is just outside of the top-10 in points, has been one of the most consistent drivers at River Cities Speedway over the years, with 12 top-10 finishes in 15 starts, including a runner-up finish in 2015, as he chases his first win at the track.

Jacob Allen won the Craftsman Club Dash at River Cities Speedway in June to earn the pole position for the 40-lap contest. The second generation driver led the first four laps, before contact with the turn four wall ended his night.

Clyde Knipp, the youngest full-time driver on tour with the World of Outlaws Craftsman Sprint Car Series, raced in his first A-Feature at River Cities back in June, picking up nine positions in the 40-lap contest.

Brent Marks, a rookie contender from Pennsylvania, finished eighth in his River Cities Speedway debut back in June.

Prior to the event at River Cities Speedway, American Tire Service Inc. will host a Meet & Greet, with a Ticket Giveaway on Race Day, Friday, August 18, from 12-2 p.m. at their location on Gateway Drive, across from the track, featuring Greg Wilson, driver of the Hercules Tires No. w20 car.

Tickets for the 2nd Leg of the Northern Tour Presented by American Tire on Friday, August 18 can be purchased online at slspromotions.ticketforce.com or by calling 815-344-2023. Tickets can also be purchased at the River Cities Speedway track office, area ticket outlets and at the track on race day.